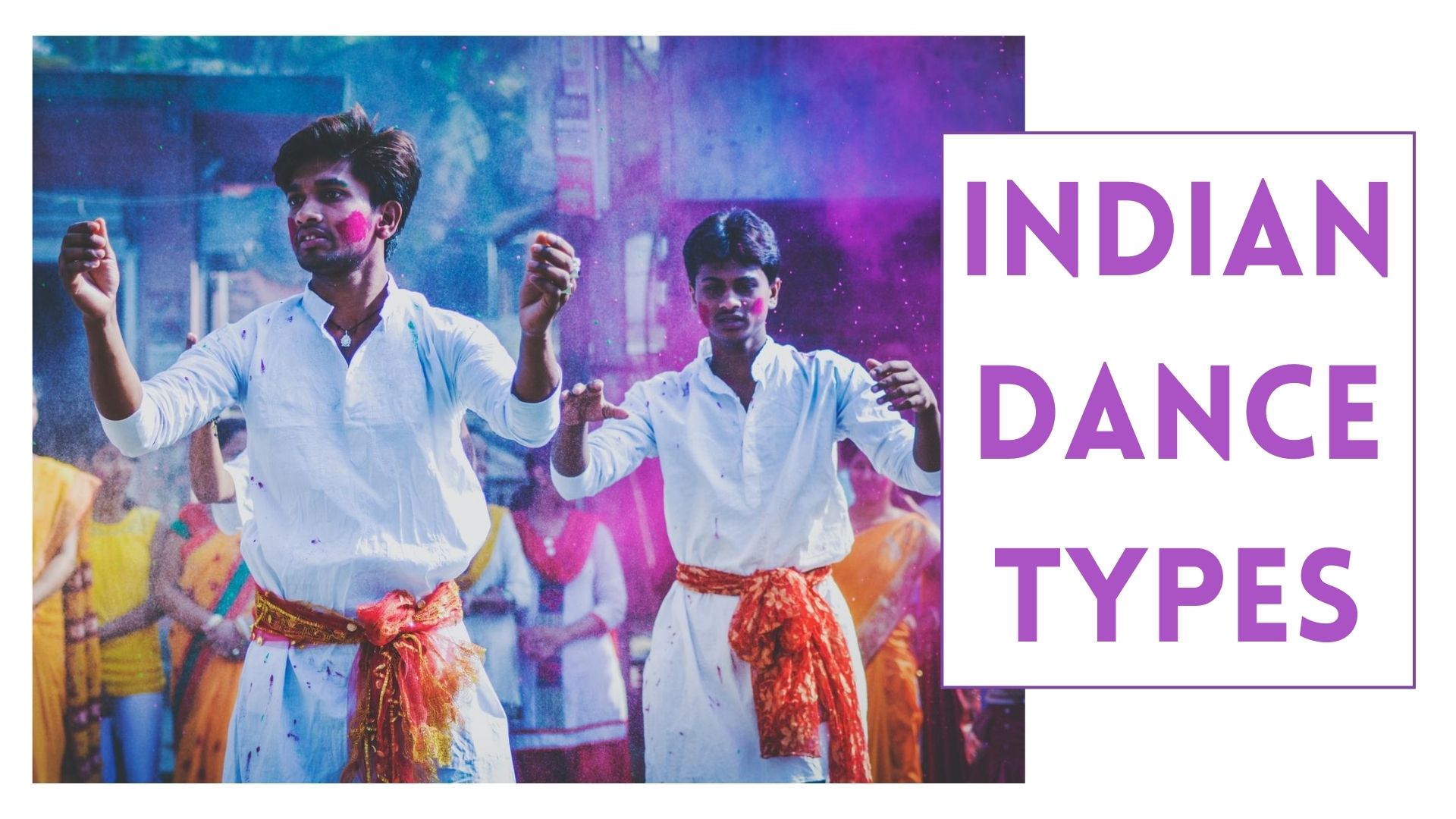 Sangeet Natya Academy, the official Academy of Performing Arts in India classifies the diverse dance forms into two broad categories; Classical and folk. The former includes the traditional dances that originate from the Sanskrit text, Natya Shastra. Their roots lie in the Hindu mythology and religious practises. What essentially labels a dance form as classical is its adherence to the strict rules and guidelines enshrined in the Natyashastra.

Classical dances involve depiction of a myth/story/legend through intricate gestures. Sentiment is central to classical dance and a performance is deemed successful only if manages to evoke an emotion among the audience. Classical dances are usually mastered through disciplined training. It involves years of dedication and practise.

It is usually slow and is taught over gradual teaching. They represent the religious heritage that the nation has inherited and keeps it preserved and alive. It is a combination of elegance, grace and beauty and brings out a sense of cultural belonging.

Folk dance is so called because it derives its existence from the folk. These dance forms are an expression of the local rituals and way of living. However, these forms of dance closely depict their life, social relationships, work and religious affiliations. Within folk dances, there are tribal dances which are inspired by the tribal folklore.

Each ethnic group possess a unique mixture of myths, legends, tales, proverbs, riddles, ballads, folk songs, folk dance, and folk music. The songs and poems for these dance forms are composed on local instruments. Music is generated via indigenous tools and its aesthetics also vary as per the ethnic group’s internal bonding.

Costumes depend on a lot of factors one of them being the geographical. The work on the fabric usually depicts the style of the culture and may vary from simple elegant patterns to gaudy mirror work. Folk dances are celebrations of events, victories and are frequently performed to appease and worship the local deities. Season and harvest are major factors affecting the timing of the celebrations.

Here is the list of Indian forms (Classical & Folk dance forms of India):

Sangeet Natya Academy confers the title of classical on the following 8 dance forms.

Here is the list of Classical dance forms of India: 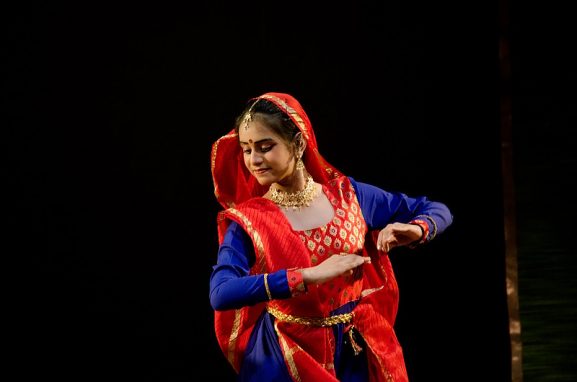 Originally from Uttar Pradesh, Kathak is a dance form that grew from the dance-drama that the storytellers (called Katha) indulged in. It has three gharanas- Jaipur, Lucknow and Benaras. Kathak  witnessed a major change in the Mughal era where it bifurcated into two main streams: one which performed in the royal darbars according to the taste of the Kings and noblemen.

These performances are mainly meant for entertainment, to celebrate a victory. To add more artistic flavour, these got incredibly dramatic. The other stream remained in the temples, performing mainly to worship and depict mythological stories to the followers.

This dance form demands intense footwork and facial expressions and usually takes around 7-8 years of training to master. 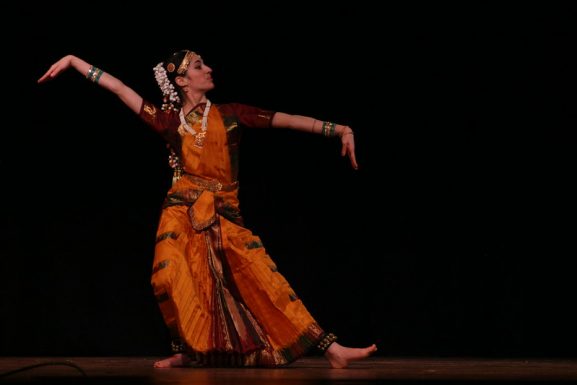 Dating way back to 1000 BC, this dance form from Tamil Nadu is deemed the oldest and is frequently addressed as the mother of Indian dance forms.

Practised predominantly by women, it was originally a solo dance but is now performed in groups as well. This dance form originated in the temples of Tamil Nadu and of neighbouring princely states.

It usually expresses Hindu mythological themes and spiritual concepts, specifically the predominant teachings of Shaivism, Vaishnavism and Shaktism. Commonly accompanied by Carnatic music, combination of beats and facial expressions make up the soul of this dance form. 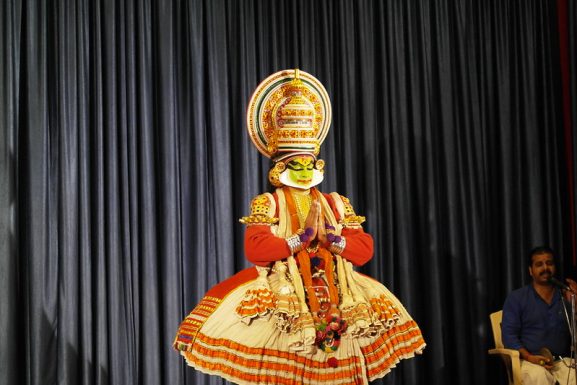 Dating back to the 17th century, Kathakali is an extremely intricate designed dramatic dance form belonging to God’s own country, Kerala. Its distinct features comprise of colourful and heavy makeup, face masks and huge costumes.

It is predominantly performed by male actor-dancers. Developed in temples, this dance includes portrayal of mythological legends and epic dramas. It derives its movements primarily from ancient arts, athletics traditions of the South, religious drama and folk arts such as Kuttiyattam.

Originally, the prime performer delivered the narration as well. Makeup or Vesham is symbolic of the archetypal characters and hence is a tedious process. It is dedicated tremendous amount of time and attention so that details can be perfected. There are five major veshams that need to be expressed, these include  Kathi (Knife), Pacha (Green), Thaadi (Beard), Minukku (radiant) and Kari (Black). The noble and the divine, appear in Green. 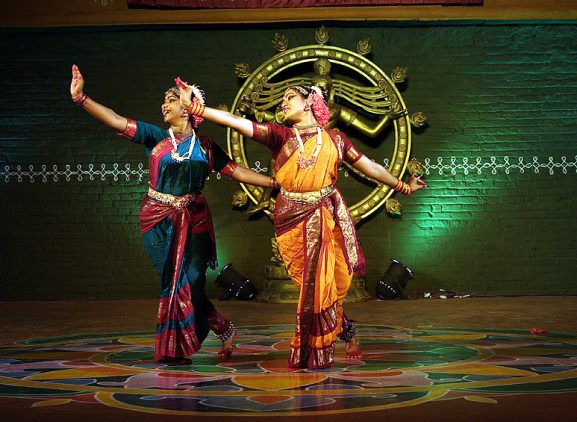 This classical dance form takes its name after a village in the Krishan district of the South Indian State of Andhra Pradesh. Rooted in the ancient religious arts, like other classical dance forms, this form was predominantly performed by male brahmins who adorn disguises to depict the stories of temples and other spiritual beliefs. Modern Kuchipudi tradition witnesses both male and female performers.

It believes that Kuchipudi originated as a systematised and stylised tradition founded in the 17th century by the orphan disciple of Tirtha Narayana Yati, named Siddhendra Yogi. 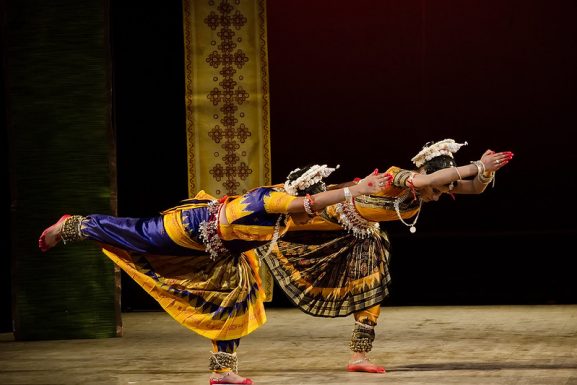 Originated in the ancient temples of the eastern costal state of Odisha, the dance form take sit name after the state. It is predominantly performed by women and express religious legends and spiritual concepts through dance drama genre.

Its primary themes revolve around Vaishnavism,  Shaktism and traditions associated with Hindu deities, Shiva and Surya.

This dance-drama is performed through enactment of devotional poems and mythical stories of the religious scripts. This dance comprises of expressions, gestures and sign language, soft body movements and bright costumes. This dance is mainly performed in the temple and its premises or extended complexes. 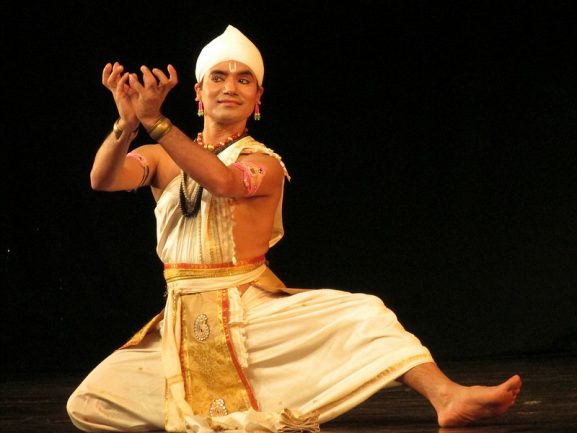 Another dance drama from the eastern region is Sattriya. Its origin is attributed to the 15th century Bhakti movement scholar and saint named Srimanta Sankardev. The performance is an elegant combination of dance, ballad and enactment.

These are more like plays but with a melodious background score and performed publicly in community halls and monasteries. This art is associated with the themes of much admired and popular love of Radha-Krishna and sometimes Ram and Sita. 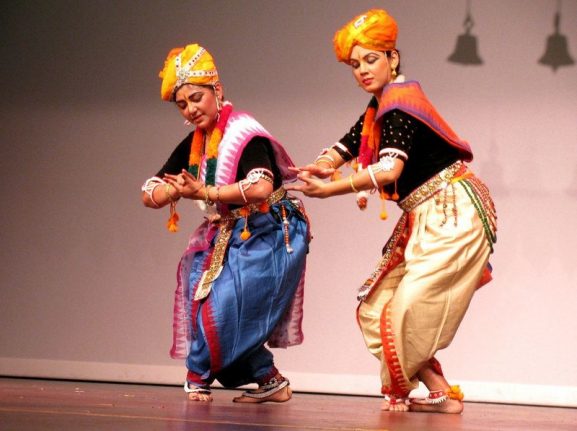 Manipuri is named after its parent north eastern state, Manipur. It is specifically known for the portrayal of Vasihanavism, Shaivism, Shaktism and depiction of Rasleela (Radha Krishna’s love story).

It is team effort with girls decorating in beautiful, shiny, cylindrical skirts. It lays special emphasis on upper body movements and hand gestures. 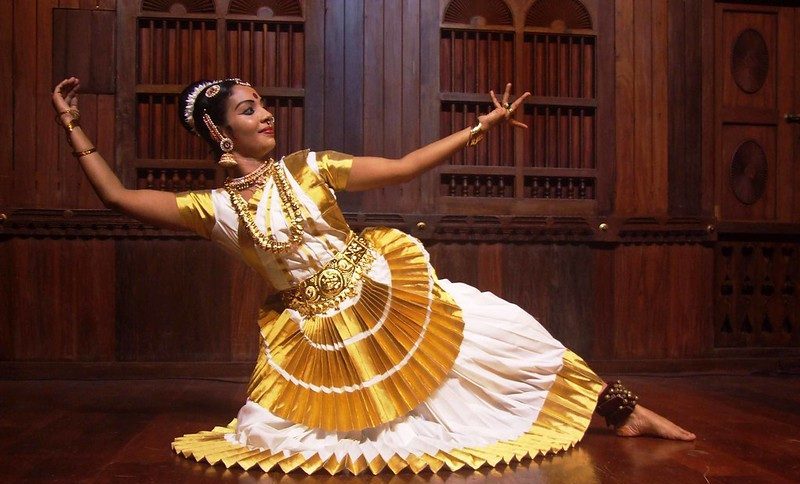 Mohinyattam is named after the seductress actor of Vishu named, Mohini. A mythological creature she exerts her charisma to intervene in clash of egos and helps the good and righteous virtues to prevail over the evil intent. It is a dance that is soft, elegant and carries a feminine charm. It is a traditionally performed solo and predominantly by females.

It includes symbolic and pristine dance-drama performances combined with melodious recitation of songs composed in a language called Manipravala, a hybrid of Malayalam and Sanskrit.

There are innumerable ethnic dance forms in every state. But the following are the most popular dances that have garnered popularity across the nation.

Here is the list of Best Folk dance forms of India: 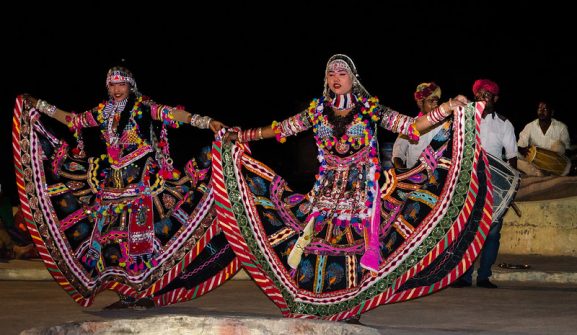 This dance takes it name after the tribe called Kalbelia. It is a nomadic group whose prime occupation is to rear snakes and trade venom. They are mainly located in Pali, Ajmer, Chittorgarh, Udaipur districts of Rajasthan. The Kalbelia dance is mainly a celebration of the tribe’s culture. Its serpent resembling movement marks the identity of the group as snake charmers.

Mainly performed by women in black swirling skirts, with heavy embroidery and mirror work, they adorn themselves with traditional tattoos and jewellery. The males usually play musical instruments, along with indigenous instruments used by the community to catch snakes.

The performances are energetic and rhythm and beat increases as the performance progresses. The tribe holds a reputation for instant composition of music and improvising during performances! Songs are usually inspired from the folklore and mythological legends performed during Holi. These traditions are passed down to generations orally.

The prop use of this dance is amazing, balancing 10-12 lined matkis with burning fire on head, dancing on a crate with nails pointing upwards, standing on glasses, balancing on part (a vessel used to knead dough).This dance form made its way to Heritage list of UNESCO! 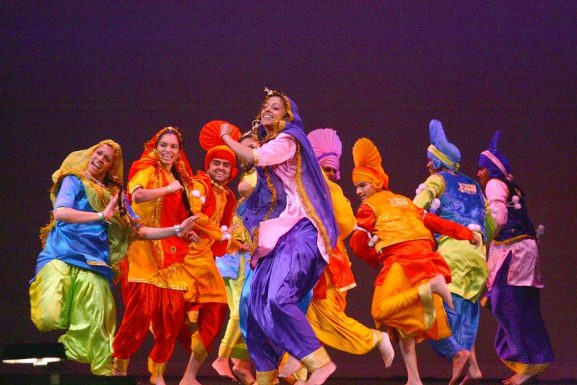 This dance form has taken over the entertainment industry of the nation! A lively dance form from Punjab, it was traditionally associated with the festival of Vaisakhi (which is a celebration of harvest).

It includes kicks, leaps and bends to the enjoyable beats of dhol. Highly energetic, this dance marks every happy occasion and has been incorporated in Bollywood songs to add an upbeat flavour. It has now come to be identified as a source of entertainment at weddings and parties. This dance includes sticks as props. 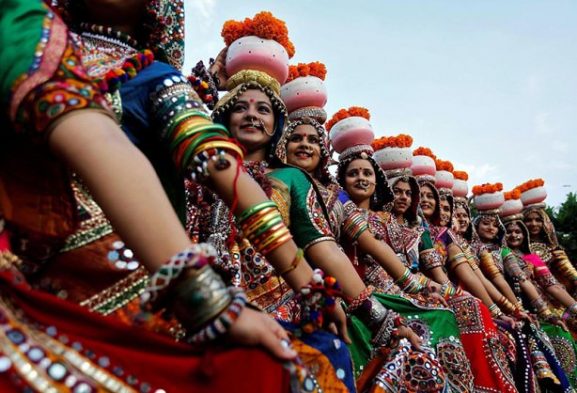 Traditionally, performed during the nine day festival of Navratri, this dance form is predominantly performed by women in concentric circles around a picture or statue of Goddess Shakti as an object of veneration.

This dance form has gained immense popularity and is performed in Garba nights across the country. Girls adorn themselves with colourful chaniya-choli, decorated with mirrors, beads, shells, stars and embroidery work. The dupattas draped in traditional gujarati style.

Whereas boys wear a short kurta with dhoti paired with a colourful turban. Bollywood movies have composed amazing garba based songs that turn anthems as soon as Navratra kicks in. This dance mainly includes clapping and bending steps, starting slowly and gradually increasing to an energetic level, all in a circular motion. An associated dance form is dandiya, which involves a playful dance with sticks in couples.

Another Rajasthani folk dance that has gained national attention is Ghoomar. It takes its name after the in and out circular motion (ghoomna). Traditionally, it was performed by the Bhil tribe to worship Goddess Sarasvati.

It is predominantly performed by veiled ladies and now marks celebrations such as weddings, festivals and religious occasions. It is elegant, soft and carries a feminine charm to it. Usually involves hand movements and twirling movements.

The songs are mostly in Marwari or other Rajasthani dialects, however, Bollywood’s popular song Ghoomar in the movie Padmaavat, has not only made this dance form nationally popular but has also marked its entry in Hindi songs. The songs are mostly about conjugal bliss and relationships associated with marriage. 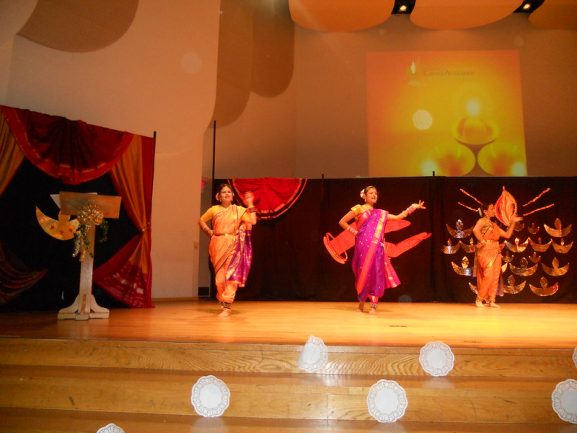 This dance is a traditional form from Maharasthra known for its powerful performance. Usually, performed during Ganesh Chaturthi, the dance is quite upbeat and turns into a celebration every time!

The Lavani that is performed and enacted publicly before a huge audience and in a theatrical setting is termed Phadachi Lavani whereas the other stream where it is performed in a close setting meant for private and select audience is called Baithakichi Lavani.

Almost all schools and colleges involve dance as part of their extra curricular activities and is mandatorily taught to imbibe the cultural significance they hold to students. There are many summer schools that offer dance as their courses. Classical dances may takes years of training and one may join a dance academy to acquire disciplined training.

There are recognised universities that offer degrees and diplomas in performing arts and classical dance is a leading option they offer. However, for folk dances there are tons of workshops organised everyday and specially around festivals. Many Zumba and aerobics classes include folk dances in their courses. Many online portal suffer tutorials for beginners. One can start at home with basics and then join a professional course.

Shoes? Check! Playlist? check! So what are you waiting for? Get ready to shake and twist! Have fun!