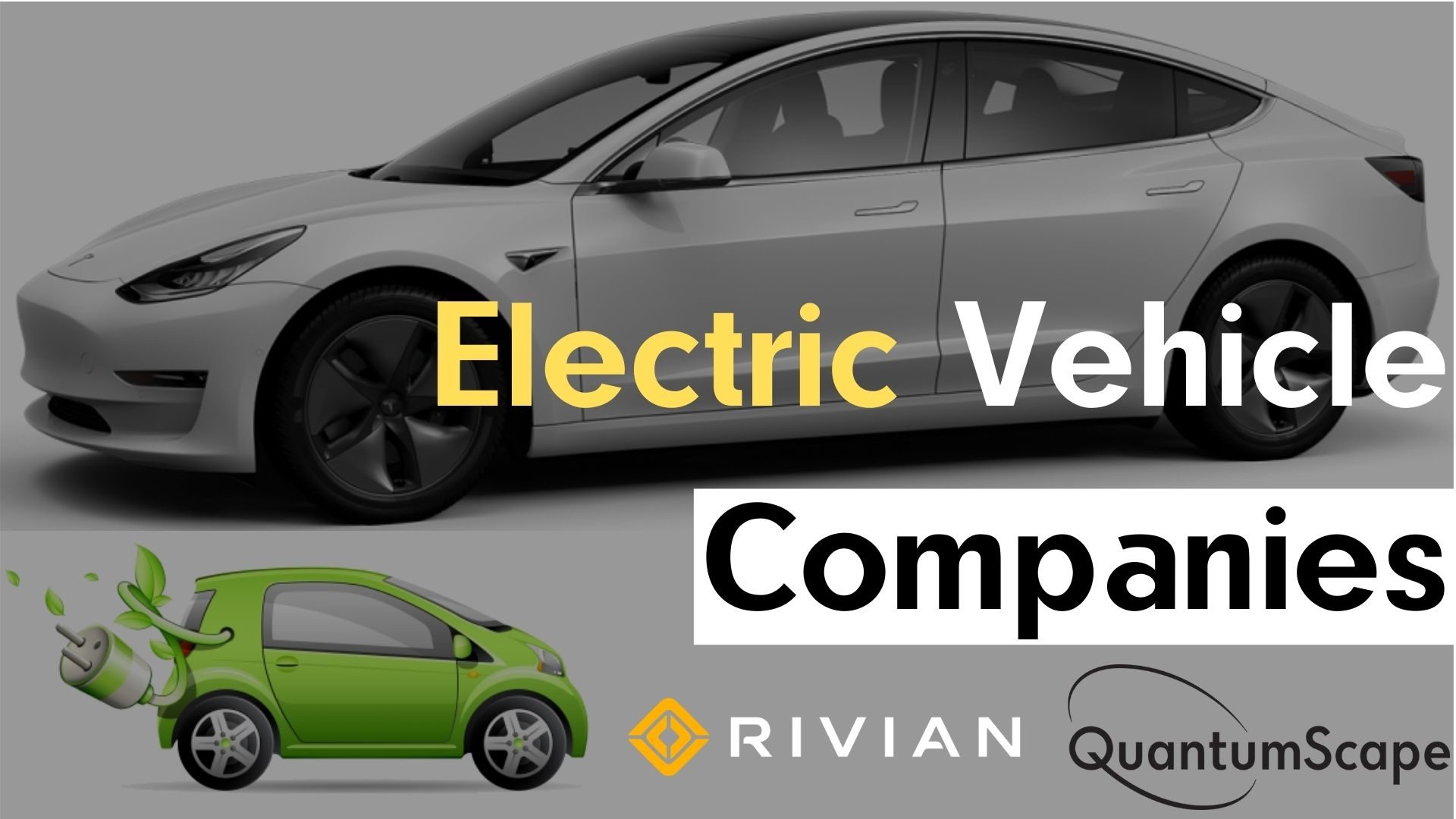 Electric vehicles were never new to us, but their demand is expected to rise shortly. As the whole world is going to adopt the pollution-free pledge,with the banning of combustion engine vehicles the electrification of automobiles is an all but a foregone conclusion.

The best electric cars can help save the planet and is economical in the long run. Although the initial cost of electric vehicles seems high, eventually it costs less to operate and maintain. Here I am introducing the best electric car manufacturing companies to you.

Here below is the list of 10 Best Electric Vehicle Companies

The company is named after the great scientist Nikola Tesla. It is specialized in developing and designing electric sports cars.

Tesla Motors had wanted to create a revolution in the electric cars industry for they believed nobody wanted electric cars because nobody created an electric car worth buying.

Today Tesla is stimulating the world’s shift to sustainable energy with electric cars, solar and integrated renewable energy solutions for homes and businesses.

Tesla’s Cybertruck is capable of challenging all the top pickup trucks. It comes with a tough exterior, can tow up to 14000 pounds, and has got a driving range of 500 plus miles. The cost of this version is $39900.The launch of Cybertruck is expected to take place by late 2022s.

The 2022 Tesla Model 3 is one of the affordable electric vehicle options in the marketplace. It borrows its styling from the Model S sedan and Model X SUV and comes with a unique interior design. Acceleration is quick and it offers up to 263 miles of the driving force.

Tesla’s Model S is the flagship version of the Tesla brand. It has got a spacious interior, usable for everyday transportation, and can travel between 348 to 520 miles.

Rivian is an American startup founded by R.J Scaringe in 2009 and headquartered in Plymouth, Michigan. It is an automaker and automotive company,  one of those companies that came up with a viable prototype after Tesla.

The Company offers lightweight and aerodynamic platform cars- R1T and R1S, SUVs, and trucks that enable fuel economy. Rivian plans to begin selling its trucks and SUVs, which will be built in a former Mitsubishi factory in Normal, Illinois, in 2022.

Rivian’s trucks will be competing against electric SUVs and pickups from instituted automakers, such as Ford and General Motors, as well ones from startups such as Nikola, Tesla and Lordstown Motors.

Rivian R1S is a sport utility vehicle and the second production vehicle from Rivian. It is a big challenge to Tesla’s Model X.It offers a driving range of 410 miles and comes in three battery sizes i.e 105kWh 135kWh and 180kWh.

R1T another challenging product of Rivian is an all-electric pickup truck that promises more than 400 miles of driving range and acceleration times than that of supercars. R1T splits the difference in size between mid-size pickups such as the new Ford Ranger and full-size trucks such as the Ram 1500.

Nikola Cooperation is an American company founded by Trevor Milton in 2014.It is named after the scientist Nikola Tesla and it is the one company which has announced the concept of zero emissions vehicle since 2016.

The company is headquartered in Phoenix, Arizona, where its research and development facility is located. Nikola Motor Company designs and manufactures electronic components, drivetrains, and vehicles including  Nikola One, Nikola, and Nikola Tre.

Nikola is also using new technologies like VR in their design process to enable its engineers to try out materials to enhance the interior of their vehicles.

Nikola One is a hydrogen-fueled electric Class 8 truck aimed to be in production by 2020. The Nikola One design includes a 320 kWh EV battery supplying 6 traction electric motors one for each wheel with a combined software-limited 1,000 hp (750 kW) and 2,000 lb-ft after gear reduction inspired by electric locomotives.

Nikola Two is a semi-tractor truck which is similar to the Nikola One. Unlike the later, a prototype driving under its own power was demonstrated for this version.

Karma Automotive is an American based company headquartered in Irvine, California. It is owned by the Chinese automotive supply company Wanxiang Group and was founded by Henrik Fisker in 2015.

Karma Automotive products include electric vehicles like Revero and Pininfarina GT. The Company also manufactures and assembles automobiles, as well as offers vehicles on lease. Karma Automotive serves customers in the United States and Canada.

The Revero is a luxury electric hybrid sedan based on the Fisker Karma, maintaining much of the original exterior and interior of the Fisker Karma, incorporating an A123 battery, charger, and electrical controls.

The Revero is a good competition to aspirational electrics and plug-in hybrids including the Porsche Panamera E-Hybrid, Tesla Model S, BMW i8, and Polestar 1.

The Karma Pininfarina GT is a range protracted luxury electric hybrid coupe, based on the 2020 Revero chassis with a body by Pininfarina. It was introduced in 2019 at Shanghai Auto Show.

Sono Motor is a German-based startup founded in 2016. Its main aim is to bring fossil-fuel-free mobility affordable for everyone.

Sono Motor is a team of engineers, designers, technicians, and industry experts who are developing and building a forward-looking electric car that is suitable for daily use, with integrated solar cells and innovative mobility services.

Sono Motor’ flagship product is Sion which is a solar-powered, fully electric car that can be charged using the electric grid or its solar cells

Sion is a fully electric solar car that can charge on itself using its 248 integrated solar cells. Sion can generate an additional range of 5800 km per year. The drive will be a three-phase asynchronous motor with a power of 120 kilowatts (161 hp) with a motor voltage is 400 V.

Saietta Group is an automotive manufacturing company headquartered in Bicester, Oxfordshire formed by the merger of Agni Motors and Agility Global in 2015.

Agni Motors was a manufacturer of high-efficiency electric motors. It was also a TTXGP racing team under the name Team Agni. In 2010, Agni Motors and Zero Motorcycles collaborated to form the Zero/Agni racing team .

It uses the TorqSense technology, the test rigs at the heart of Saietta’s development works based on the principle of running two motors back to back thereby adding power to counter the losses and measuring efficiency.

Lightning Motorcycle Corp. is an American-based electric motorcycle manufacturing company founded by Richard Hatfield in 2006 and headquartered in San Carlos, California. The main aim of the company is to offer its consumer the highest performance, best quality and value.

Lightning Motorcycle halo product the Sportbike LS-218 is the fastest production motorcycle in the world – gas or electric. Its retail price starts at $38,888 USD

The Lightning SuperBike is the world’s fastest production electric motorcycle with the SCTA official World Record of 215.960 mph and a best-timed run of 218.637 mph at Bonneville during Speedweek in August.

With such a big battery pack and high-performance parts like Ohlins suspension, Brembo brakes, carbon fiber body, etc, and with the ability to break 200 mph in the highest gearing configuration, the LS-218 stands in a class all its own.

Yamaha is a 133 years old Japanese multinational company with a variety of products and services. It is one of the constituents of Nikkei 225 and is the world’s largest piano manufacturing company.

In 1955 Yahama opened its motorcycle division and named it Yamaha Motor Co., Ltd., which initially started as an affiliated company that later became independent.

Yamaha’s electric motor prototype is capable of producing the industry-leading high power density for automobiles and other types of vehicles. Its compact unit generates up to 200kW in output.

Honda had rolled out its electric CRF-style dirt bike last year and patented parts of an electric Super Cub recently. And Kawasaki has gone full hype-train with its upcoming electric motorcycle known as the Kawasaki EV Endeavor.

Yamaha’s plans with its high power electric motors is to integrate these new motors into its vehicles or offer them as platforms for other companies is unknown. In either way, it is very well evident that Yamaha has marked his presence in the electric vehicle industry.

QuantumScape Corporation was founded by Jagdeep Singh in 2010 and headquartered in California. It is a pioneer in the development of next generation solid-state lithium-metal batteries for use in electric vehicles.

The company’s mission is to revolutionize energy storage to enable a sustainable future. QuantumScape’s recent progress and high valuation mark it as the new competition for Tesla. QuantumScape is known for its famous lithium-metal batteries, the heart and soul of the electric vehicle space.

QuantumScape’s lithium-metal battery uses a solid ceramic electrolyte and is said to be safer than the conventional liquid electrolyte. It is the next generation of batteries utilizing lithium-metal, which has a significantly higher energy density than lithium-ion.

The design replaces the conventional graphite/silicon anode with a lithium-metal anode, speeding up the recharge to 80% capacity in just 15 minutes.

Also, its energy density is much higher, exceeding 400 watt-hours per kilogram, which far surpasses 250 Wh/kg for the best current lithium-ion batteries.

ChargePoint is the world’s largest network of electric vehicle (EV) charging stations in North America and Europe, it was founded in 2007 by a group of entrepreneurs with comprehensive experience in technology and design from leading global companies.

ChargePoint stations are part of a complete solution that includes 24/7 driver support, cloud-based software with features and plans for every industry and world-class service and maintenance

AC charging stations:CT 4000 and CPF50-CT 4000 are suitable for property owners, businesses and municipalities interested in an EV charging solution for employees, customers, and residents and CPF50 is suitable for fleet depot charging and personal charging for multifamily residences.

Electric vehicles are the only technological option available for an eco-friendly future as they have no emissions and can be powered using clean, renewable energy sources like solar power, which in turn  help us to reduce the amount of carbon contribution.

With companies like Tesla, Nikola, Rivian at the forefront we can expect a revolution in the Electric Vehicles production industry. There are quite a lot of companies working on electric vehicles with a lot of their products already quite competent with their gas-powered vehicle counterparts.

In a country with soaring gas prices, this still-new technology needs a leg up to ensue.