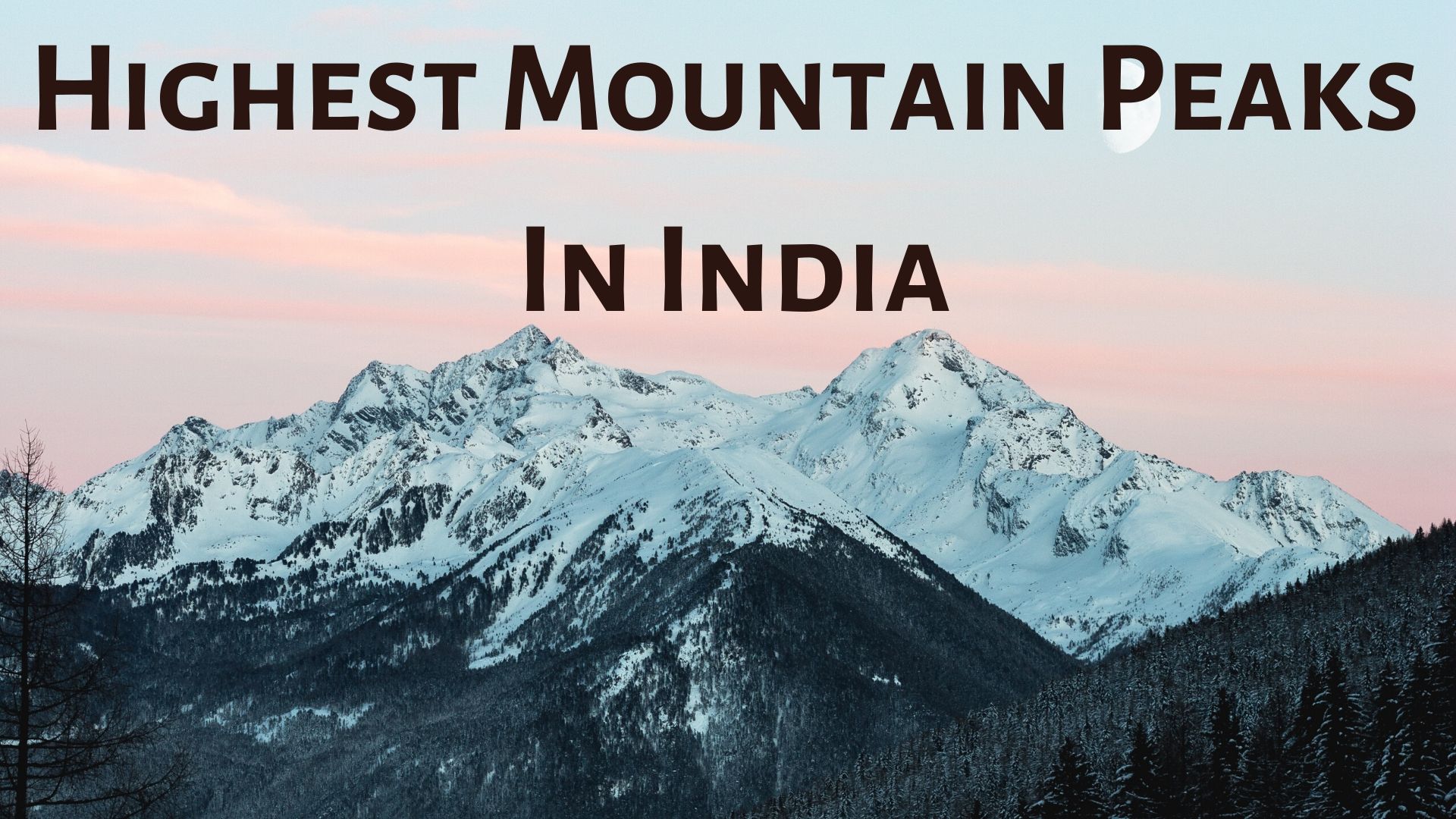 Incredibly Incredible India! Yes. It is true. With its rich cultural heritage, It’s delicious food, its beautiful colours, varying topography, unique flora and fauna and its diversity…India offers everything a wanderlust can ever want.

Not only that, India’s magnificent physical diversity accentuated with its rich lingual and traditional diversity. From It’s lush green valleys to arid deserts, from it’s flowing rivers to evergreen forests, from lofty mountains to its ghats, India has it all. Feeling Proud now?

India is home to many marvels of the world. Acting as a barrier to the country, the Himalayas is the highest mountain range in the world, which has some of the highest peaks in the world to add to its magnificence. These peaks not only are of great cultural and political relevance but also serve as a great influence to the climate and weather hence affecting vegetation etc of the place.

Some of the known and popular ones are Kanchenjunga and Nanda Devi while some lesser-known like  Tirsuli, Rimo and Hardeol. These mountain peaks attract lots of adventure enthusiasts and are also part of local tradition or folklore. What follows are the ten highest mountain peaks in India.

Here is the list of 10 Highest Mountain Peaks of India: 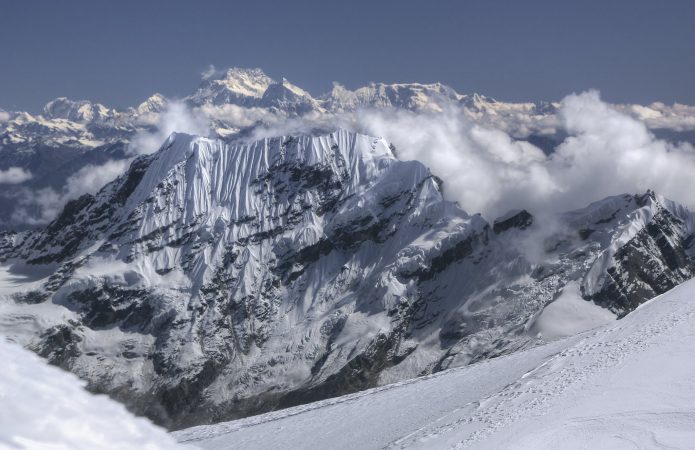 Kanchenjunga is the third highest mountain peak in the whole world, right after Mount Everest and K2 (Kangchenjunga-2) both of which are also part of the mighty Himalayas. Located in Sikkim at the border between India and Nepal, the peak is 8586 meters high and is the highest peak in India. The section of the Himalayas named as Kanchenjunga Himal lies both in India and Nepal and consists of 16 peaks over 7000 meters.

Kanchenjunga is the official name adopted by the Royal Geographical Society that is nearest to the local pronunciation of the Tibetan name. The name Kanchenjunga translates to “five treasures of the snow”. Local Lhopo population believes that 5 treasures are salt, gold, grain and medicines, scriptures and invincible armour.

The peak is delimited by Honak Chu, Goma Chu and Jongsang La in the north, Teesta river in the east and in the west by Ghunsa and Tamur river. It is known to be one of the most sacred mountain peaks since it was first scaled. 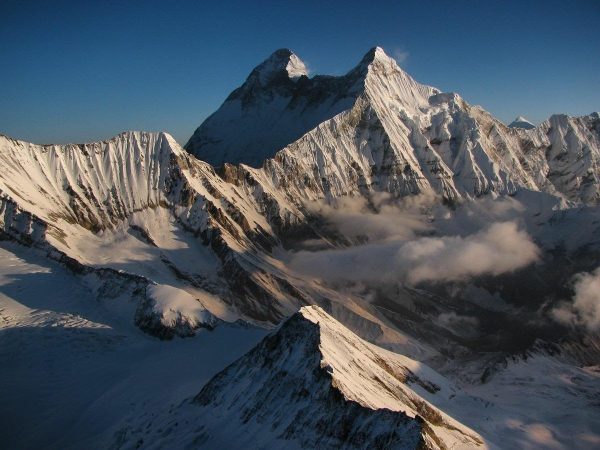 It was only after Mount Everest, Kanchenjunga and Dhaulagiri were discovered by western surveyors that Nanda Devi peak had to lose its highest peak title. The peak is surrounded by the Rishiganga valley in the West and Gori Ganga valley in the east.

The nearby Nanda Devi National Park was declared in the year 1998 as the UNESCO world heritage site. The peak holds a very important place in the local garhwali culture and hence in every twelve years, Nanda Devi Raj-jat Yatra is done and the peak is worshipped. 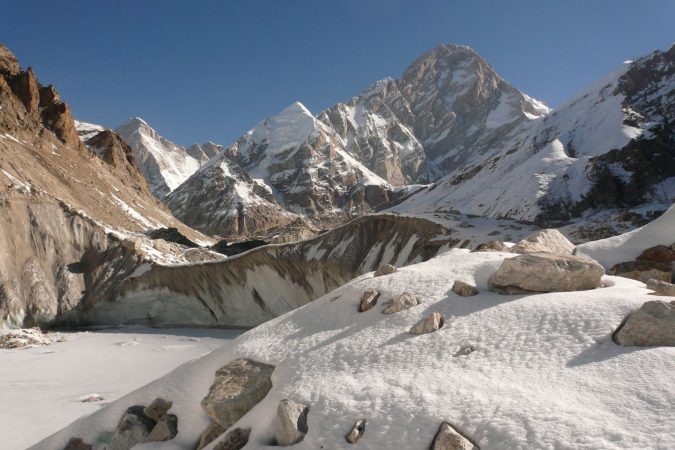 Kamet is also located in the Chamoli region of Uttarakhand state and is the 3rd highest peak of the country. With a height of 7,756 meters, the peak is the highest summit of Garhwal Himalayas in the Zaskar mountain range. It resembles a giant pyramid in the appearance with 2 peaks on the top. Kamet lies in close proximity to Tibet and is surrounded by three other peaks as well.

Bring very close to Tibetan plateau, it often receives a lot of winds coming from the plateau. The 3 other peaks that it is close to are: Mukut Parbat, Mana and Abi Gamin witch are also very prominent peaks. The peak is situated in the north range of the Himalayas and that makes accessibility less possible. 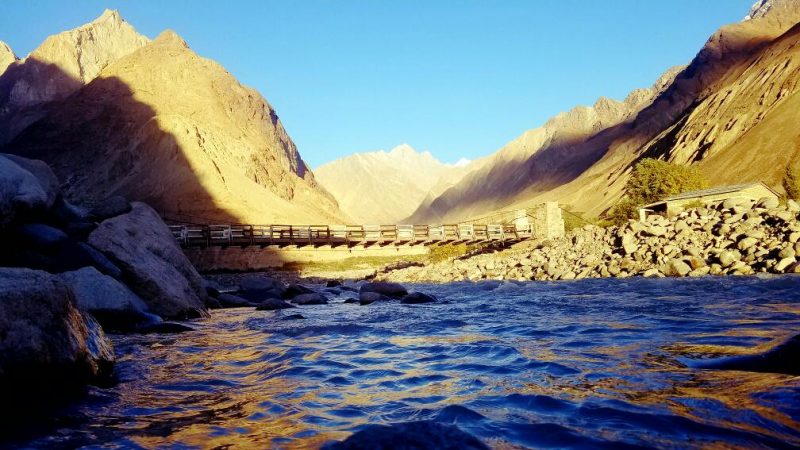 Located in Jammu and Kashmir, at a very remote location in the mighty Karakoram range (the biggest range of the Himalayas), the mountain peak of Saltoro Kangri boasts of a height of 7742 meters and is often dubbed as the highest mountain of Saltoro mountain range. It is also known as K10 by geographers and mountaineers.

The peak is located in the actual ground position line between Siachen region (region controlled by India) and Pakistani controlled territory west of Saltoro range. The Saltoro Sub-range of Karakoram range boasts of some of the highest glaciers of the world, including the popular Siachen Glacier. The peak holds a special position in the history of both India and Pakistan. 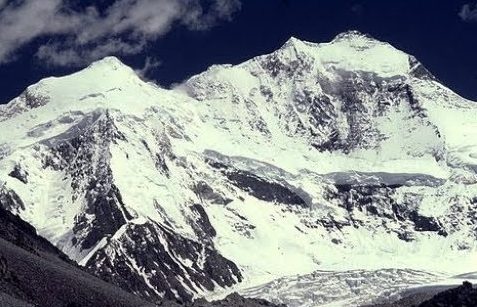 Claiming the 5th spot in India’s highest peaks, Sasser Kangri has a rise of 7672 meters. Located in the northernmost union territory in India of Ladakh, in the Saser Muztagh range (the easternmost subrange of Karakoram range) comprising of a group of 5 magnificent mountain peaks.

Ranked 35th in the world, the Sasser Kangri is the highest peak among all of its 5 counterparts. It is a part of Saser Kangri Massif and lies in the northwestern end of Saser Muztagh. The peak is nearby two prominent glaciers named Sakana and Pukpoche. 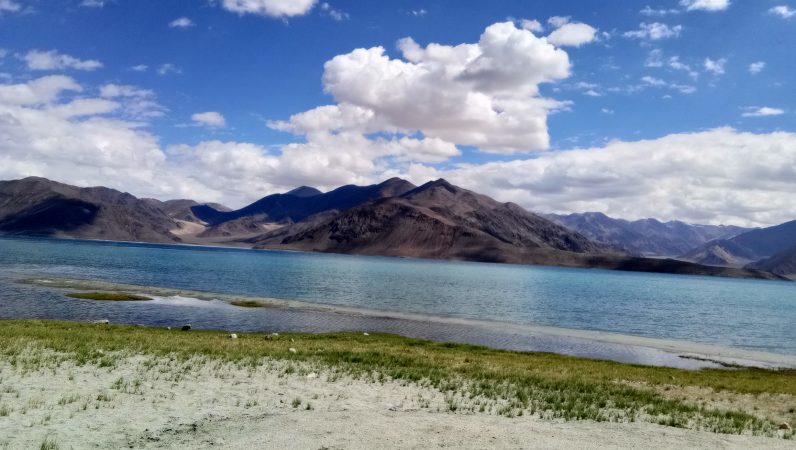 The highest peak of the Rimo Muztagh sub-range of the great Karakoram range, Mamostong Kangri is the 6th highest peak in India. It is also known for its survey name, K35. The peak is in the vicinity of the Siachen Glacier with a towering height of 7516 metres. It is the 48th highest independent peak of the world.

Mamostong Kangri is located at a very remote location and hence doesn’t really receive much of visitation from tourists and enthusiasts alike. Also, as it is situated between India and China border, it is also prone to political and military tensions, which further adds to its lower visiting statistics. 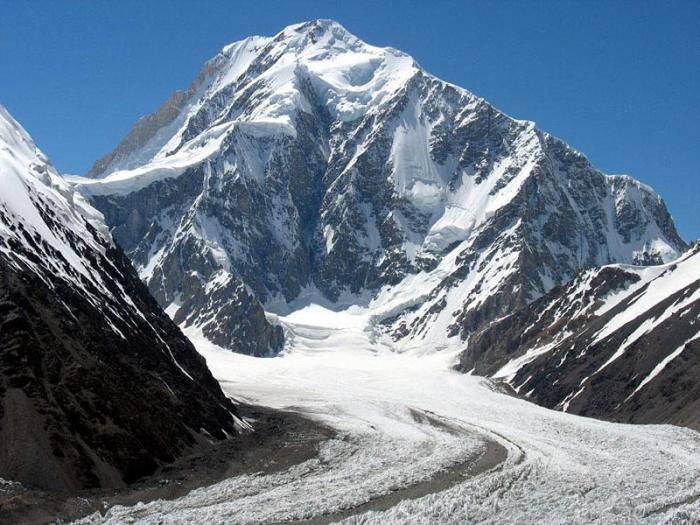 Also located in Ladakh, the northernmost union territory of India, The peak has a staggering height of 7385 meters and is situated on the northern side of the Rimo Muztagh subrange of the Karakoram Range.

Rimo Mountain comprises of 4 mountain peaks, out of which Rimo I is the highest peak in the Rimo Massif. Due to its extremely remote location, it is inaccessible and was actually unknown and unvisited till the 20th century. It is home to one of the most popular and important trade routes of India namely Karakoram Pass in the northeast Rimo mountains. 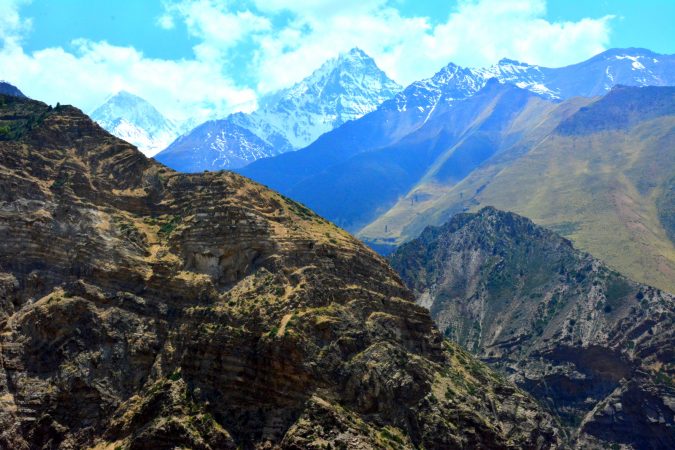 Situated in the state of Uttarakhand in the Milam Valley of Pithoragarh, located in the Kumaon region of Himalayas, the harder peak has a towering height of 7151 meters and a major mountain peak of the region.

The peak is located in the northern side of the Kumaon sanctuary and guards the Nanda Devi peak. The place is famously known as the Temple of God. The peak is in close proximity to another very important peak known as the Trisuli in the north and Rishi Pahar is on the south. 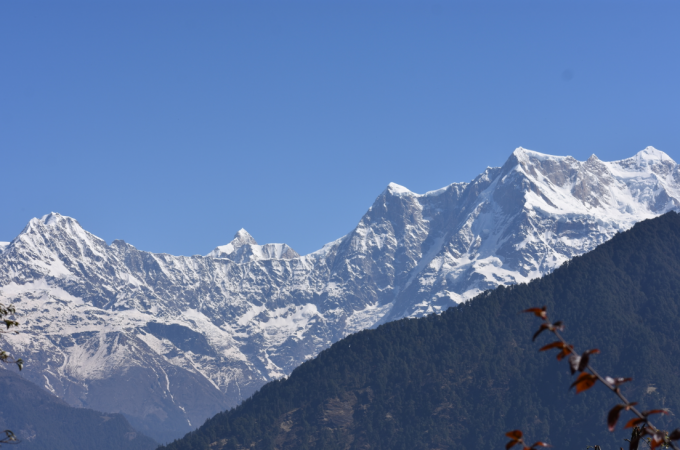 Chaukhamba in its most literal meaning translates to 4 Pillars as in ‘Chau’ means four and ‘Khamba’ means pillars. With a summit height of 7138 meters, the peak is the highest mountain peak amongst the four peaks in the Gangotri group of mountains in the Garhwal region of Himalayas.

The mountain has 4 peaks lined next to each other, hence the name ‘Chaukhamba’. Chaukhamba lies at the crown of the famous Gangotri glacier. It is located near the holy Badrinath temple and hence has a great significance in the culture. 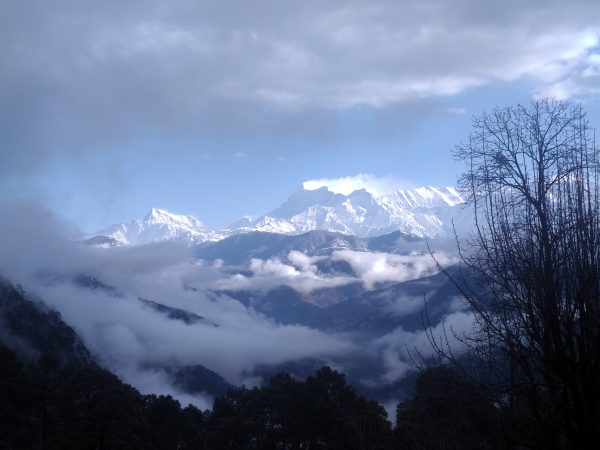 Situated near the Nanda Devi sanctuary, in Auli, Uttarakhand the trisuli peak has a staggering height of 7120 meters. The peak Trisuli  is the highest among the 3 peaks of Trisuli named Trisuli I, Trisuli II and Trisuli III.

The 3 peaks resemble a trident hence the name Trisuli that originates from ‘Trishul’ which means trident. Trishul is known to be the weapon of Lord Shiva and this is one of the reasons that people often associate lord Shiva with the peak.

The peaks are a matter of immense pride not only for the states that they’re in but also for the nation as a whole. They are all part of the mighty Himalayas, the highest mountain range in the world and contribute to the local weather, tradition as well as culture. The peaks are all different from each other in many respects, particularly in height and location but they do share a lot in common.

Every year, lots of explorers, mountaineers, travellers , nature enthusiasts and adventure aficionados come to these locations and see the spectacularity of these locations for themselves. Hope the information helps, proves to be effective and provides some relevant content to the wanderlust in you.