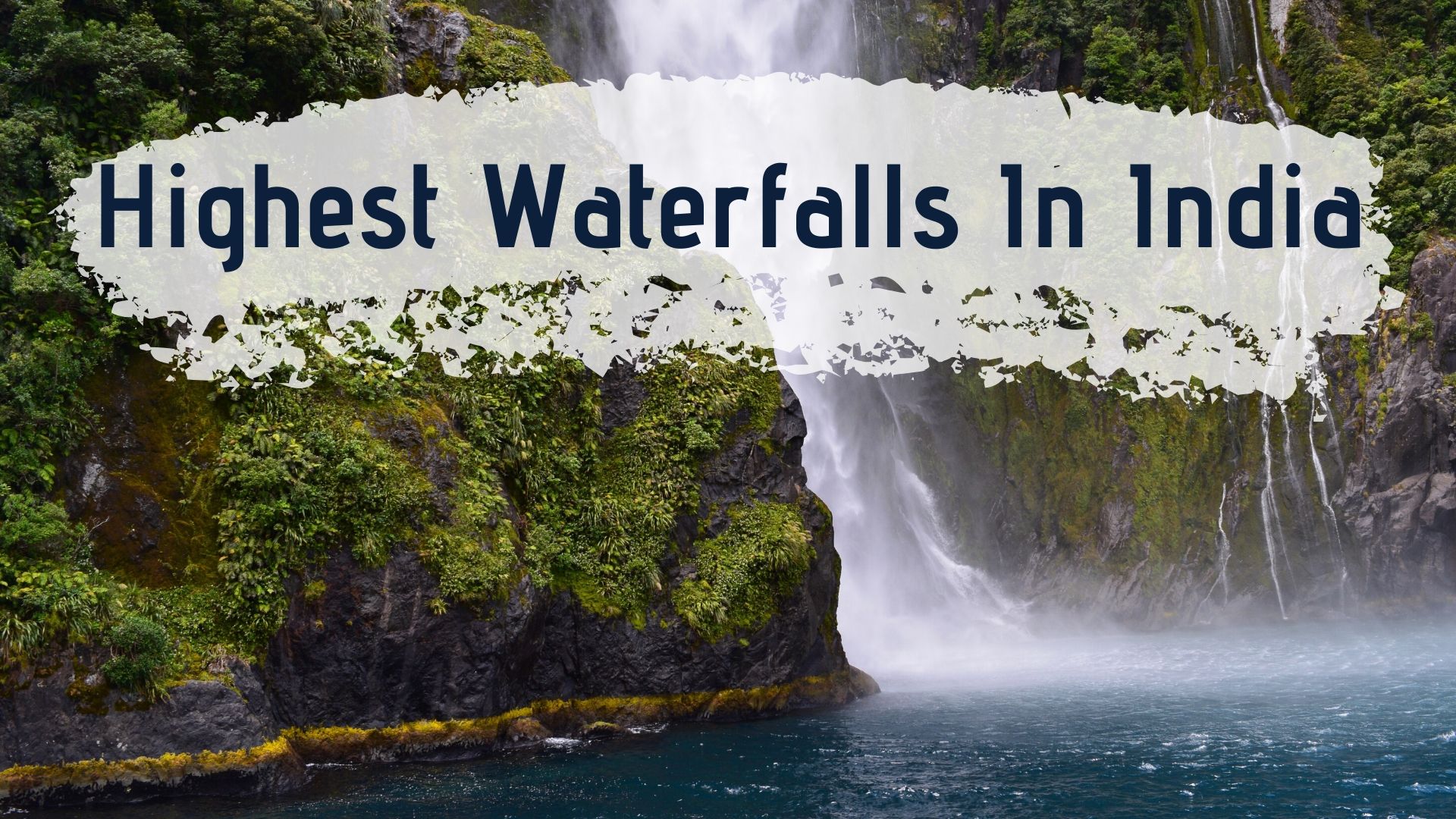 Pablo Picasso, Leonardo da Vinci, Claude Monet, and Vincent Van Gogh these greatest painters of all time hardly need an introduction, as most of us are quite familiar with them even today. Bestowing them the title “Greatest of all the time” indeed does them justice, but if you compare their works against the majestic nature you might find that their works are hardly worth talking about.

Indeed, Nature is easily the greatest painter, if you take the cement cages we live in out of the equation, you might witness a majestic blast of thousands of different colors that can speak to your heart and soothe your mind.

The greatest example of nature’s artistry might be its colorful sunsets, lush greenery, and waterfalls. Speaking of waterfalls, I believe these are quite a terrible beauty. I mean how many creations of Nature can you think of that are ‘scary’ and ‘breathtaking’ other than waterfalls? Not many I believe.

Starting now you will witness the biggest waterfalls that you must visit in India: 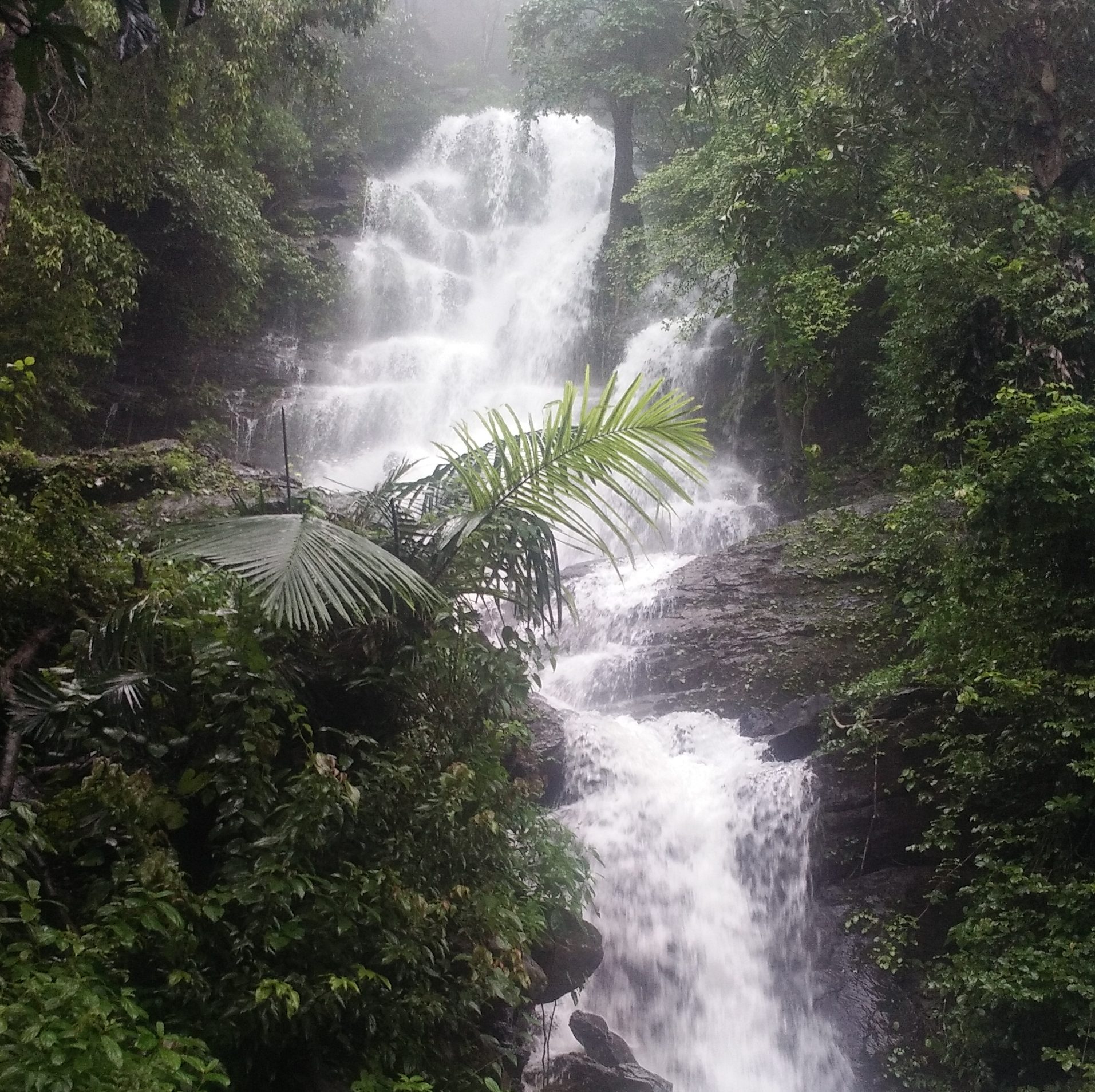 Formed by the Varahi River and located 2.3 km from Mastikatte at Nidagodu village in Karnataka, With a height of 455m(1,493 ft) Kunchikal is the highest waterfall in India and second highest in Asia. 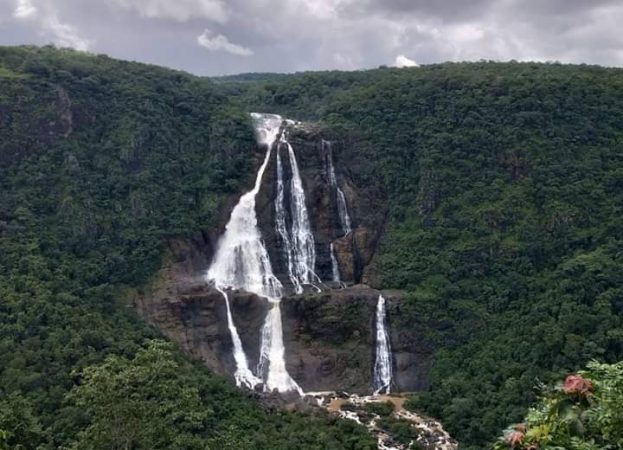 Located in Simlipal National park in Odisha, Barehipani waterfall is the second-highest waterfall in India with a massive height of 399m (1,309ft). It’s a two-tiered waterfall whose tallest single drop is 257m.

Barehipani waterfall originates from Budhabalanga river that flows over the Meghasani mountain of the Eastern Ghats.To visit Barehipani, one needs a prio pass. This pass is available in Kashipur or Baripada. Monsoon is the best time to visit Barehipani and also the most dangerous. 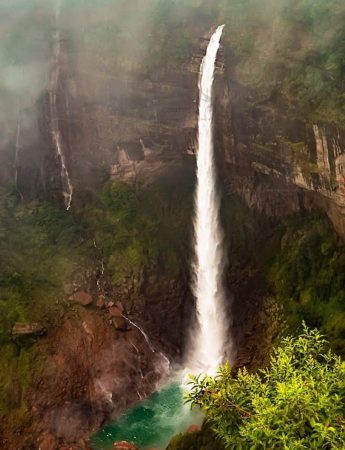 Located near Cherrapunji in East Khasi Hills of Meghalaya, which is famed as the wettest region in India and also one of the wettest spots on Earth (Better keep raincoats handy).NohKaLikai is the tallest plunge type waterfall in India with 340m(1,115ft) as the total height of fall, making NohKaLikai our very own low-key Angel falls.

It’s constantly fed by the water from a small plateau which means you can visit during summers and still gaze at this terrible beauty. There’s a legend of a woman named Ka ( female gender prefix in Khasi) Likai who was a widow with a young daughter. She worked as a porter to make ends meet but she realized that she couldn’t take care of her beloved daughter if she worked as a porter, so she married again.

But soon her husband got jealous of the step-daughter as his wife wouldn’t give much attention to him. So He killed the daughter and cooked her and made his wife eat it after she returned from work. When she realized what had happened, she went mad with rage  and grief and jumped from the waterfall… people named the waterfall after her as a grim reminder. All in all… It feels like an episode of Crime patrol. 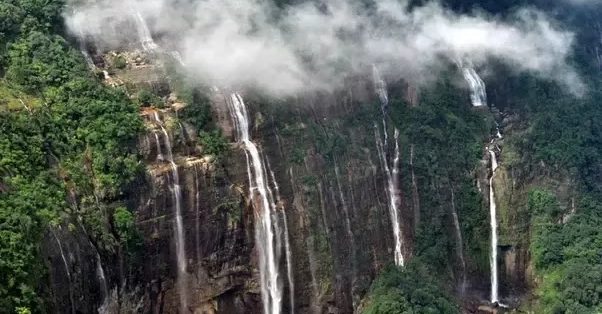 Nohsngithiang or the seven sisters is the second tallest waterfall from Meghalaya with a height of 315m (1,033ft) and 70m(230ft) width. It’s also located in the same region as the NohKaLikai waterfalls so you can visit both the same day. If you want to visit Nohsngithiang from NohKaLikai, it’ll take you around 4-5 hours of drive via NH106.

The ideal time is to visit in full bloom of the monsoon season as Nohsngithiang is mostly dry during summers. There are also plenty of hotels where you can relax and get a good view of Nohsngithiang waterfalls. 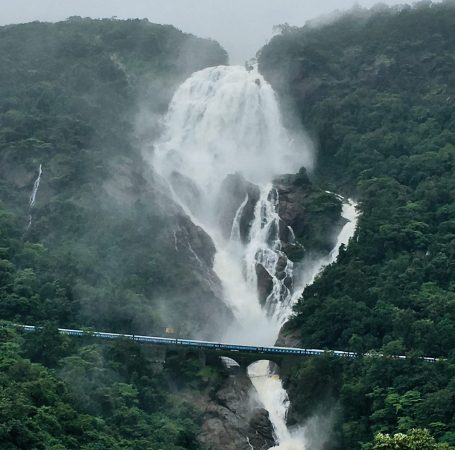 This sea of milk is the third tallest waterfall and a four-tiered waterfall in India with a height of 310m (1017ft) and 30m (100ft) width. Dudhasagar forms the border between Karnataka and Goa while being situated on the Mandovi river.

Earlier people could visit Dudhsagar falls by just boarding train at Castle rock in Karnataka and disembark at Dudhsagar stop and then trekking on the railroad till the falls but currently doing so is banned and you might get arrested for it. So the best and legal way to visit the waterfalls is through the Bhagwan Mahavir wildlife sanctuary taxi from the Goan village called Molem.

Like every other waterfall, Dudhsagar is spectacular in the Monsoon season, especially in August. This also the time you’ll have to view the falls from afar. 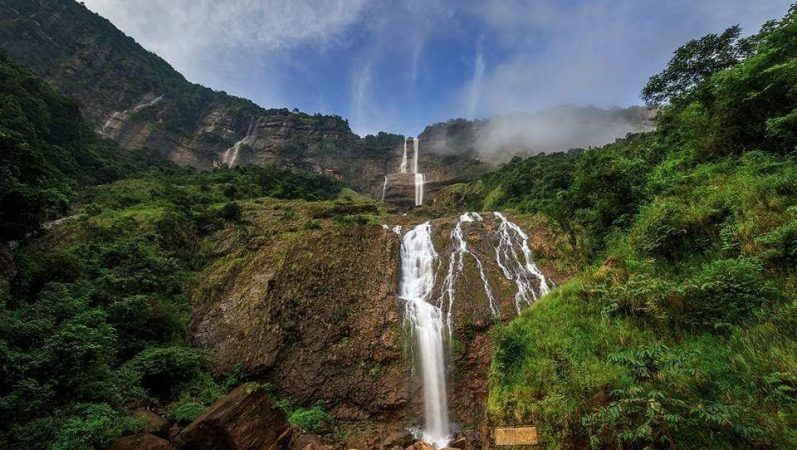 With a height of 305m (1,001ft), Kynrem is the third highest waterfall from Meghalaya. And just like NohKaLikai and Nohsngithiang, Kynrem is also located in East Khasi hills and around 12km from Cherrapunji.

Although unlike the other two falls, Kynrem falls is situated inside Thangkharang Park. Also unlike any other falls in Meghalaya, Kynrem is accessible in any weather. You can get close enough to feel the spray of water from the falls on your face.

Do note–if you’re traveling in a car, you will find the road till the waterfalls full of potholes so hang tight. 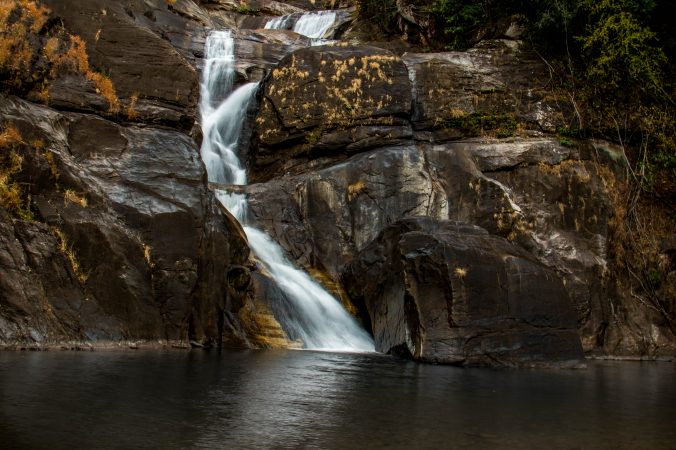 Meenmutty waterfalls are must-visit waterfalls in Kerala. Meenmutty is a three-tiered waterfall with a height of 300m (984ft). It is located in the Wayanad district which is approximately 29km away from Kalpetta.

You must trek nearly 3km from the Kallar river and through dense forest to reach Meenmutty. As the main Meenmutty waterfall is an accident-prone area, people are restricted from entering.

It’s a well-maintained place hence people are banned from bringing plastics or leaving their trash behind. Meenmutty is the perfect place to be alone with nature and enjoy yourself. The best time to visit these falls is post-monsoon or summer as Meenmutty is especially dangerous in monsoon. Do check if the falls are open before you visit. 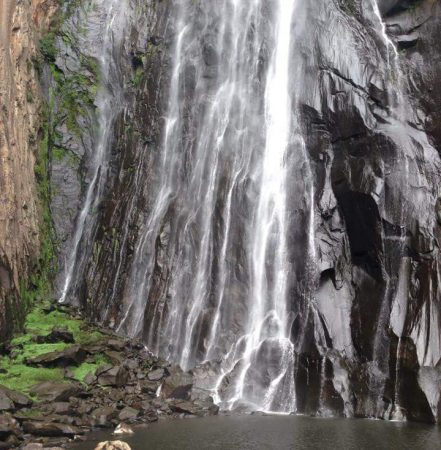 Thalaiyar is located at the plush green Palani hill ranges in Dindigul district. You can watch this falls on the way to Kodaikanal at Dum dum rock viewpoint. You can get close to the waterfall but that’s a bit too risky. 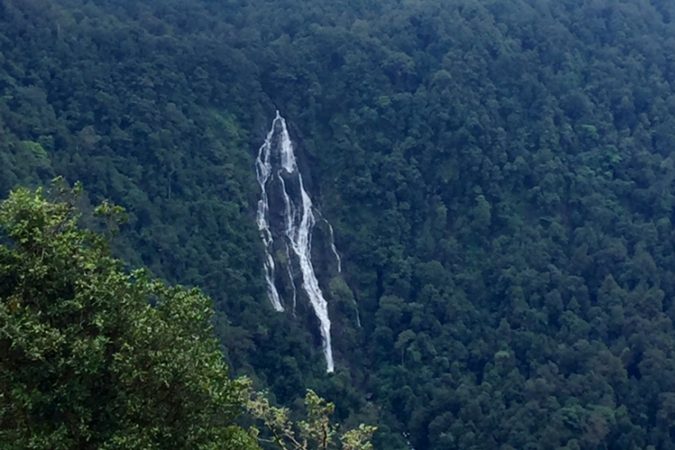 Located near Agumbe in Shimoga district of Karnataka, Barkana falls is formed on Seetha river and surrounded by lush green Western Ghats. Barkana Falls is a tiered type that falls with 259m as the height of falls. This fall is rain-fed so only accessible in the Monsoon season. 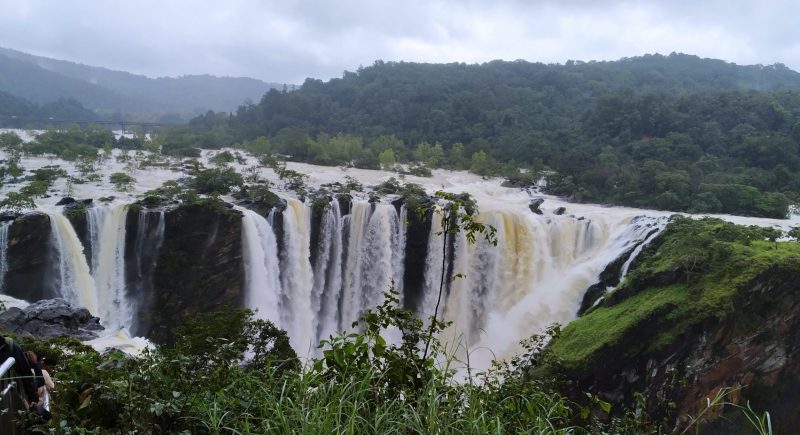 Jog falls is a segmented waterfall which becomes a plunge type waterfall in Monsoons. Jog falls are formed by the Sharavathi river cascading down into Sharavathi valley. It is located near Jog village and the falling point of the waterfall is located in Siddapura.

The funny thing about Jog falls is in Kannada, Joga means falls. So whoever says jog falls is saying falls. In Kannada Jog falls is known as Joga Jalapatha. 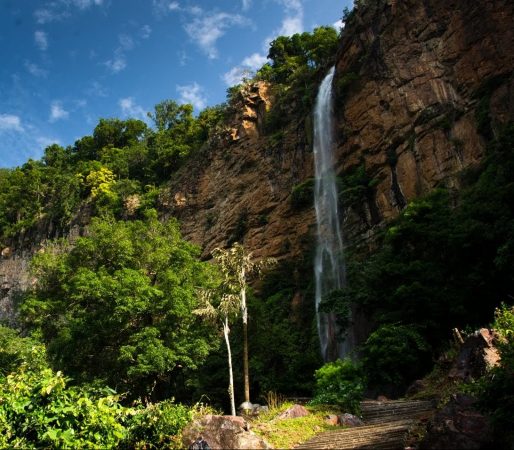 Khandadhar waterfalls are the second tallest waterfall in Odisha with an approx height of 244m (801ft). It is located at Nandapani in Sundargarh district. There’s quite a legend about khandadhar waterfalls. It revolves around a community being possessed by a goddess called Kankala Devi who is through everything, so Pauri Bhuiya made her sit on a rock and she ate through it too.

That act gave birth to the Khandadhar waterfall.You can drive to reach this fall but you might have to walk for the last 2km due to bad road conditions which can be just worse in monsoon. 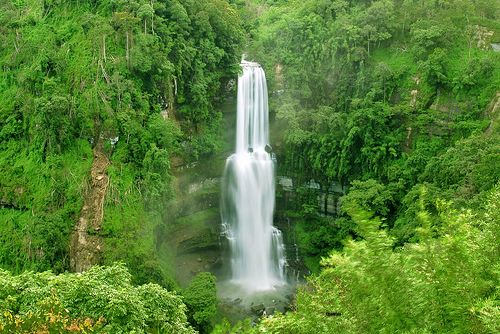 Vantawng is a sad beauty that is located 5km south of Thenzawl in Mizoram. It is also the highest uninterrupted water in Mizoram with a height of 230m (750ft). Vantawng waterfall is formed by river Vanva and named Vantawng who was an excellent swimmer.

And was said to hover like a fish over water, until a drifting log fell over him and killed him.It is quite difficult to get near the waterfall due to the sheer forested hillsides. To tackle this issue a comfortable viewing tower was constructed. 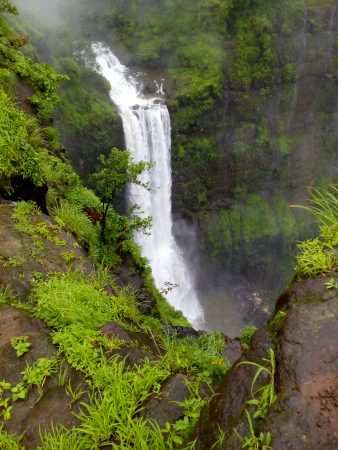 The last but not the least Kune waterfalls are quite a popular destination for people in Maharashtra due to its location. It is located between Lonavala and Khandala, which are quite famous hill stations.

Compared to the waterfalls given above, Kune is quite small with a height of 200m. Being surrounded by lush greenery makes it quite an impressive picnic spot. The best time to visit is from July till December.

There are quite a lot of waterfalls in India. But it’s quite sad as not many people try to visit these waterfalls and behold the sheer might of Nature and be at peace emotionally.