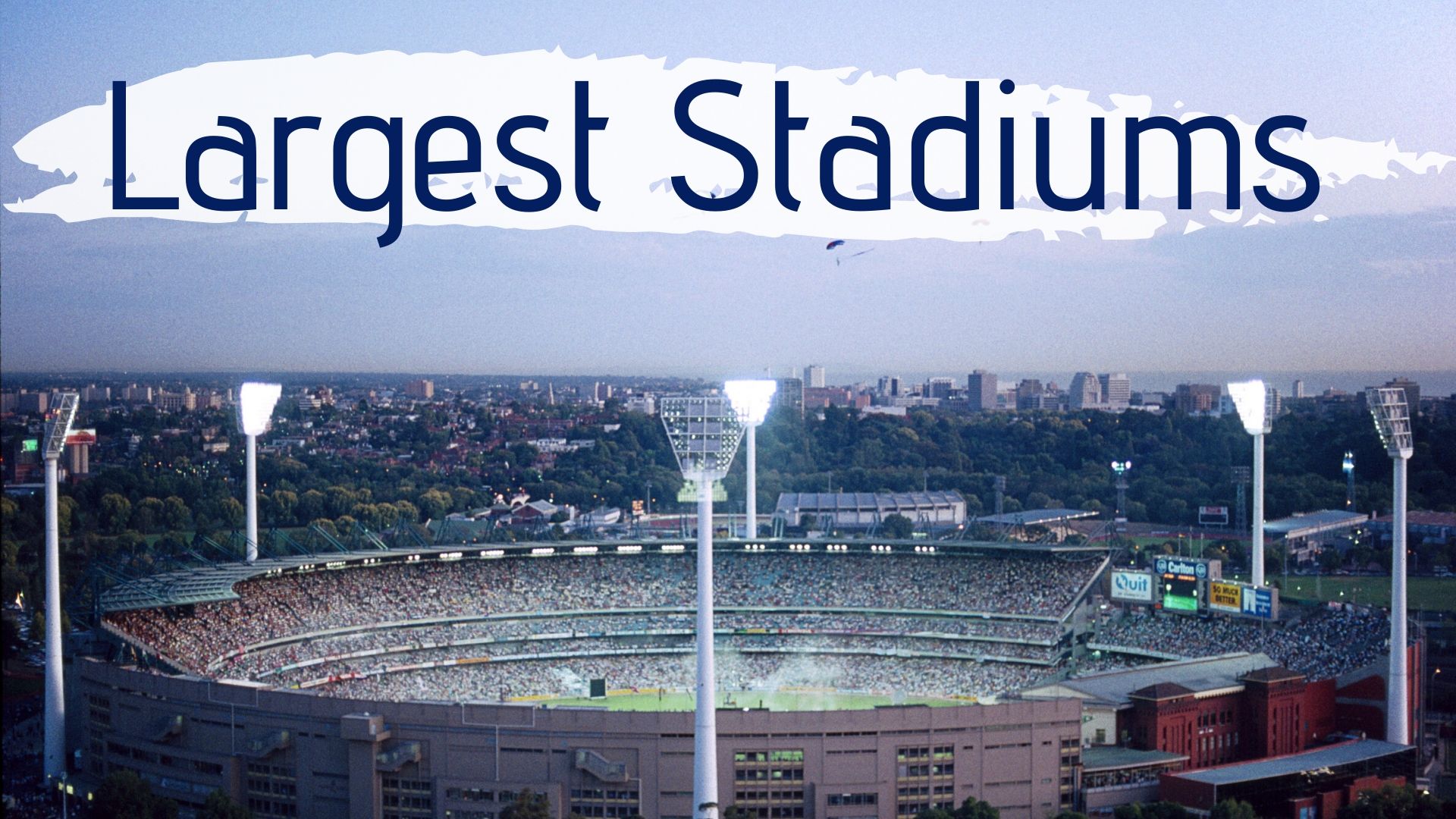 From overseas and across the oceans, nothing beats the feeling of a filled stadium. Where every person’s opinion counts, where every individual is a champion regardless of which side you support, where the mind is as important, if not more important than any other part of the body.

The winning spirit is in the air that everyone breaths. Winning is the song regardless of nationality, country, race, color, or tribe. More than 50,000 strangers united together for a common goal and similar smiles.

Here is the List of Top 10 Largest & Biggest Stadiums In India: 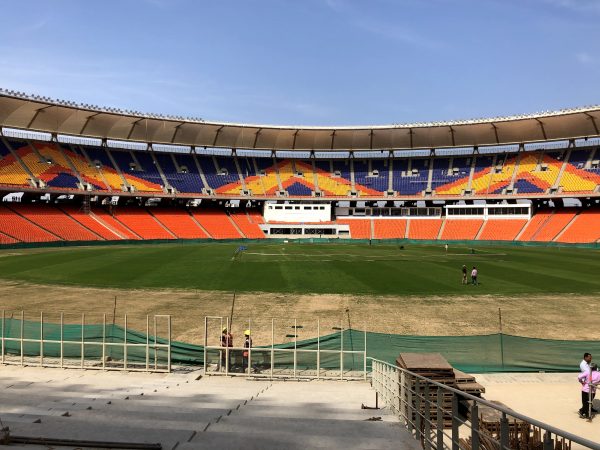 Constructed in 1983, Sardar Patel Stadium is also known as Motera Stadium based in Ahmedabad in India. It is the world’s largest cricket stadium with a seating capacity of 110,000, and Gujarat Cricket Association owns it. The stadium is mostly used for hosting Test, ODI, and T20 matches.

Initially, the stadium was known as Gujarat stadium but later renamed Sardar Vallabbhai Patel in tribute to India’s first home minister and deputy prime minister. Sardar Patel stadium came in existence after the Government of Gujarat donated 100 acres of land on the banks of Sabarmati River.

Cricket is a game loved, followed, and adored by millions of Indians across the globe. No other stadium, but the Sardar Patel Stadium provides the best venue to watch when the same is at the display. With such state of the art stadium, it gives a perfect opportunity for citizens to witness glory at its best. 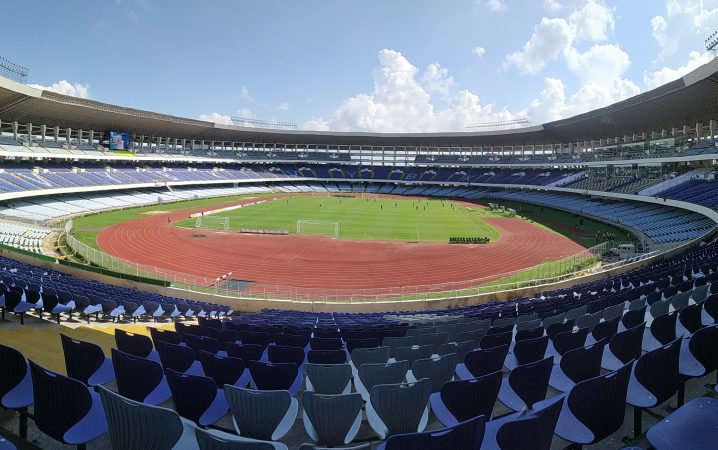 This stadium was established in 1984 and is also known as Vivekananda Yuba Bharati Krirangan (VYBK). It is the 2nd largest stadium in India with a seating capacity of 85,000. The stadium is located in Bidhannagar, Kolkata and it is the home of ATK, East Bengal FC and Mohun Bagan.

Before the renovation, it was the 2nd largest football stadium in the world with a seating capacity of 150,000 spectators. In order to meet the recommended FIFA standards, the stadium switched back to natural turf of which it hosted under 17 world cup final.

Construction of sports facilities is a costly affair not only in India but all over the world. But the proper management and cooperation among clubs and stadia management is the key to coexistence and the growth of sports in any country.

Salt Lake stadium is a perfect example of the fact that we can coexist and accommodate each other when we work together. 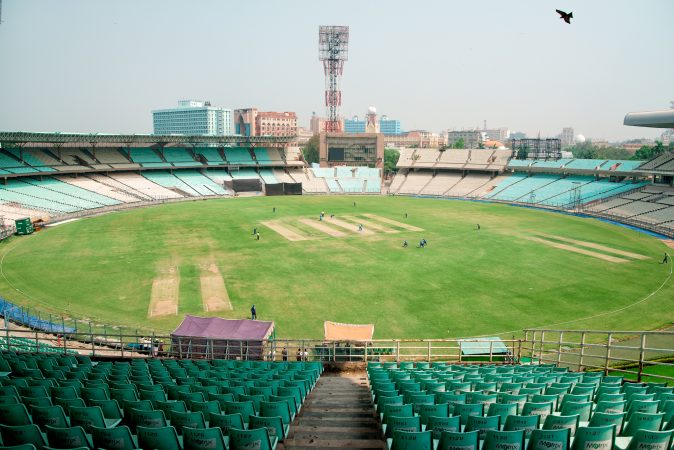 It has a seating capacity of 66,349, and it’s the home of the Bengal Cricket team, IPL Franchise Cricket team, Kolkata Knight Riders, and also a venue for Test, ODI, and T20I of the Indian national team.

The stadium is also known as the “Mecca of Indian Cricket” since it was the first officially built arena for the game of cricket.

Not only is this beautiful stadium, a sports arena, but it also holds the rich history of the game of cricket. It took the game of cricket to the next level by establishing itself as the first officially constructed cricket stadium in India.

This is the genesis of the love and support that the cricket game enjoys in India. 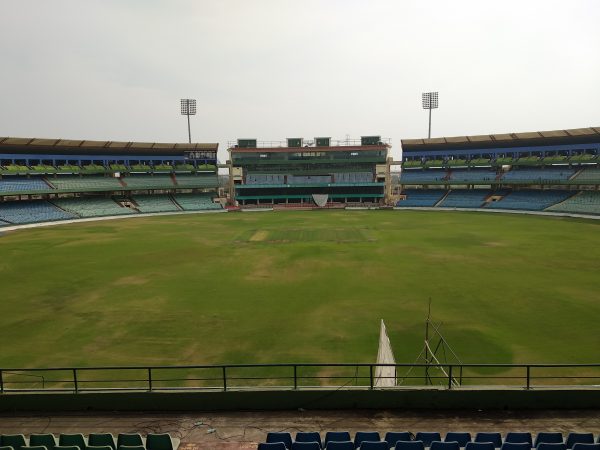 The stadium is also known as Shaheed Veer Narayan Singh International Cricket Stadium. It is located in Raipur Chhattisgarh, it is situated close to the Swami Vivekananda Airport in Nava Raipur 21 kilometers away from Raipur central City, and located at National highway.

It has a seating capacity of 65,000, and it was opened to the public in the year 2008. The stadium’s built and also owned by the Government of Chhattisgarh. The venue is regarded as the home of the Daredevils franchise.

Fun facts about the stadium:

A stadium arena is the only avenue and place where the brave and the wise grace the moment of history and absolute beauty unfold. Stadiums are the breeding grounds where friendship, unity, and togetherness are created. 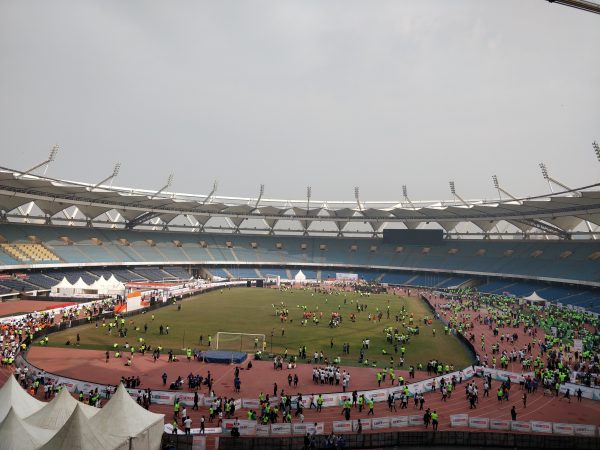 Jawaharlal Nehru Stadium is located in New Delhi, India, named after the first prime minister of India. It has a seating capacity of 60,000, and it was built and wholly owned by the Government of India. It is the home of the Indian National football team, though it also hosts other events like athletics, concerts, and cricket.

The stadium was renovated in 2010 in readiness for 2010 commonwealth games, where a German company Gerkan Marg and partners were given the mandate of designing the new look Jawaharlal Nehru stadium. The new-look stadium was ready in July 2010, and it was fitted with a new roof, improved seating and other facilities to meet the recommended standards.

Interesting details about the stadium:

The stadium is one of the latest states of the art stadiums in India, and it boasts one of the best architectural designs witnessed in India. It is an epitome of pride and a sense of belonging to the people of Delhi.

Therefore it has lived up to the purposes for which it was named, the first prime minister of India. 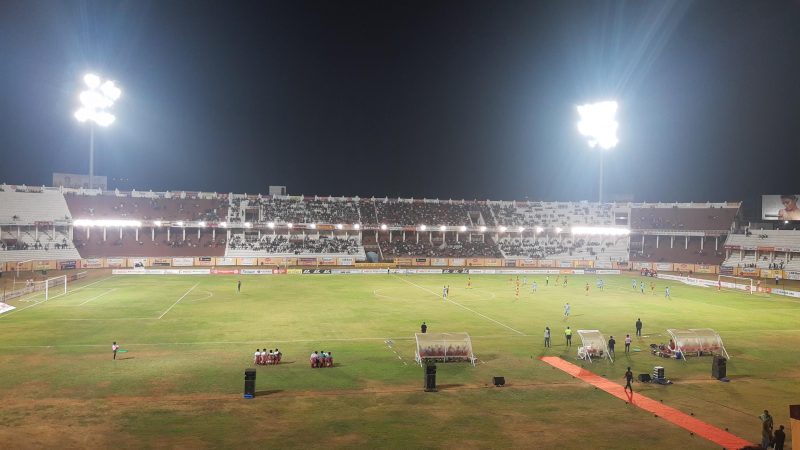 This is a multi-purpose stadium built in Kozhikode (Calicut) and mostly used to host football events. It is referred to as the home of I league side Gokulam Kerala Fc, and it was established in the year 1977. The stadium has a seating capacity of 60,000.

The name of the stadium originated from the first Chief Minister of Kerala communist leader E.M.S Namboodiripad. The stadium is equipped with floodlights for it to host both football games and cricket.

E.M.S Stadium Kozhikode is not just but a stadium, but it is an arena where history is made.

Named after their leader and being the home of India Football team. The stadium will go down in history as the home of heroes. 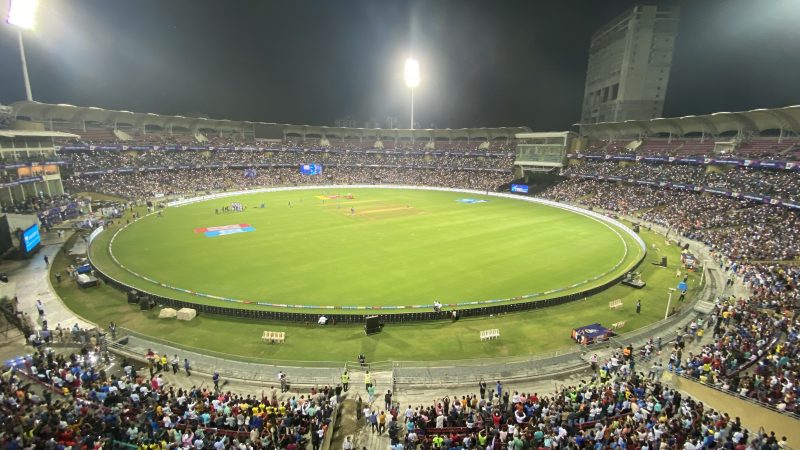 DY Patil Stadium is also known as DY Patil Sports stadium. It is a football and cricket stadium at D. Y. Patil campus at Neru in NAVI Mumbai, Maharashtra, India. Hafeez Contractor designed it. It was inaugurated in 2008, and it was the home of the IPL team Mumbai Indians.

In 2014 it was announced as the home stadium of ISL Franchise Mumbai City FC. The stadium possesses a seating capacity for nearly 55,000 spectators, making it the 7th largest stadium in India.

Exciting and fun facts to note:

The DY Patil Stadium is a masterpiece of how the security and wellbeing of spectators is and should be.

The amount of investment in security at DY Patil Stadium should be emulated by all sports-loving countries globally. Sports are a social event with the sole purpose of making people happy. 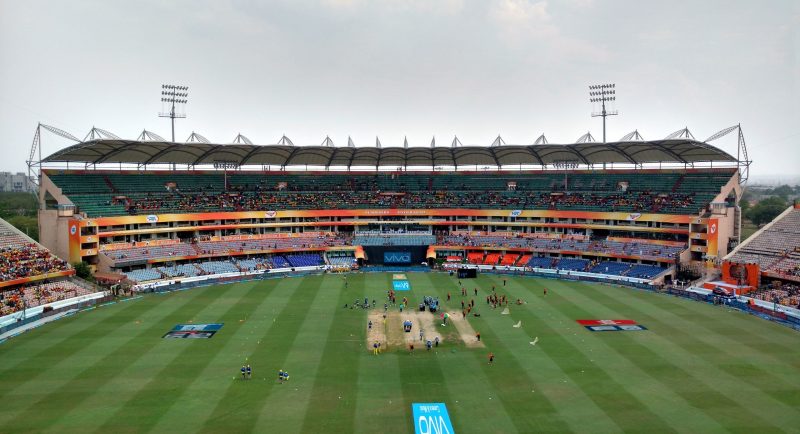 The stadium is located in Uppal, an eastern suburb of the city. It has a seating capacity of 55,000 and extends across 16 acres of land. It is formerly known as Visaka International Cricket Stadium Ground.

The stadium is owned by the Sports Authority of Andhra Pradesh, giving the Hyderabad Cricket Association limited control over the facility. It is the home of Sun riser Hyderabad (India).

The Grand Reception Hall at the facility, used as memorabilia, is an icon that does not illustrate the culture at the stadium.

Still, it is an epitome of the journey walked and graced by great men and women who graced the venue as sportsmen. Forever they will leave in the memory of the people of Hyderabad. 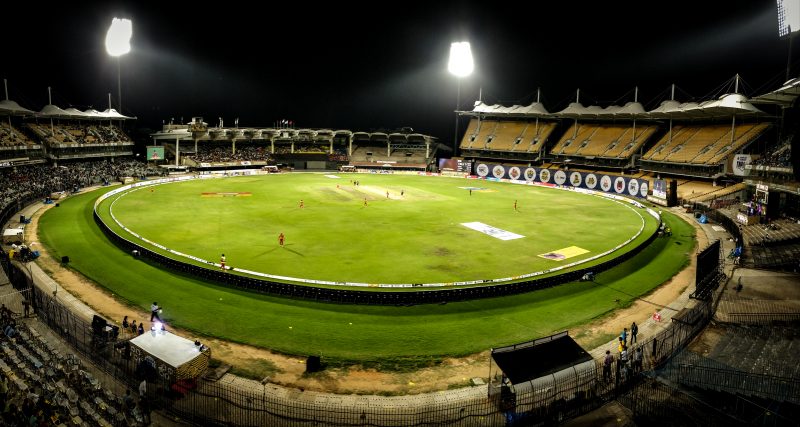 M.A CHIDAMBARAM Stadium is a well-known cricket stadium that’s situated in Tamil Nadu, India. The stadium was built in 1916, and is known to be the second oldest stadium in India after Eden Gardens in Kolkata.

The stadium is named after M.A. Chidambaram former president of BCCI, the stadium was formerly known as Madras Cricket Club Ground and also nicknamed the Chapauk Stadium.

For sports to grow in any country, the club’s management must play up their game and look for means and ways in the clubs can raise resources and establish their stadiums.

In such a way, the club is a better position to increase revenue, which can enable them to run the club efficiently. This is a significant challenge not only in India but in most developing countries. 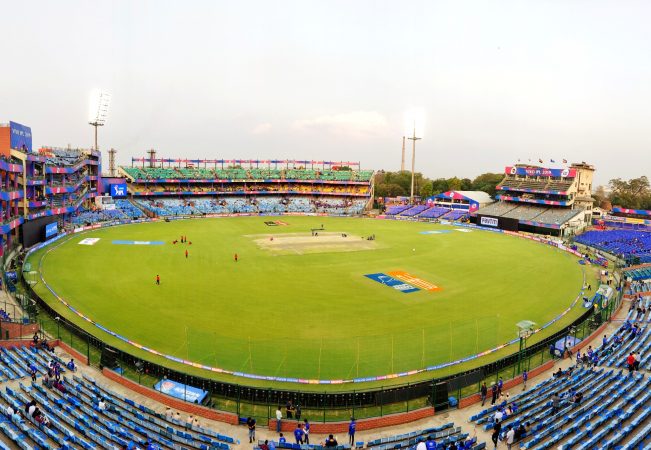 The stadium was established in 1883, in Delhi India, and the second oldest stadium in India. The stadium has a seating capacity of 48,0000.

The stadium was renamed to Arun Jaitley Stadium in the year 2019 in honor of former finance Minister Arun Jaitley. This also was a result of his contribution to the game of cricket. It’s the home of Delhi Daredevils.

This is a stadium that holds the history and or the culture of India in one accord.

The stadium is not only the oldest but its natural position in the heart of the city, and or the renaming of the same in favor of one of the country’s famous leaders makes it dearer to Indians. It speaks not only to Sports loving Citizens but also to the whole population at large.

India is a nation known across the world for incorporating several sports stadiums. Not only does the nation take sports quite seriously, but it also offers its support through masses of spectators in its enormous stadiums.

A stadium arena is the only avenue and place where the brave and the wise grace the moment of history and absolute beauty unfold. Stadiums are the breeding grounds where friendship, unity, and togetherness are created. Cricket is a game loved, followed, and adored by millions of Indians across the globe.

Each of the above-mentioned stadiums offers the best venue to watch when the same is at the display. They further provide a perfect opportunity for citizens to witness glory at its best. Not only are these stadiums spectacular sports arenas, but a few of them also upholding the rich history of numerous games, including the game of cricket.