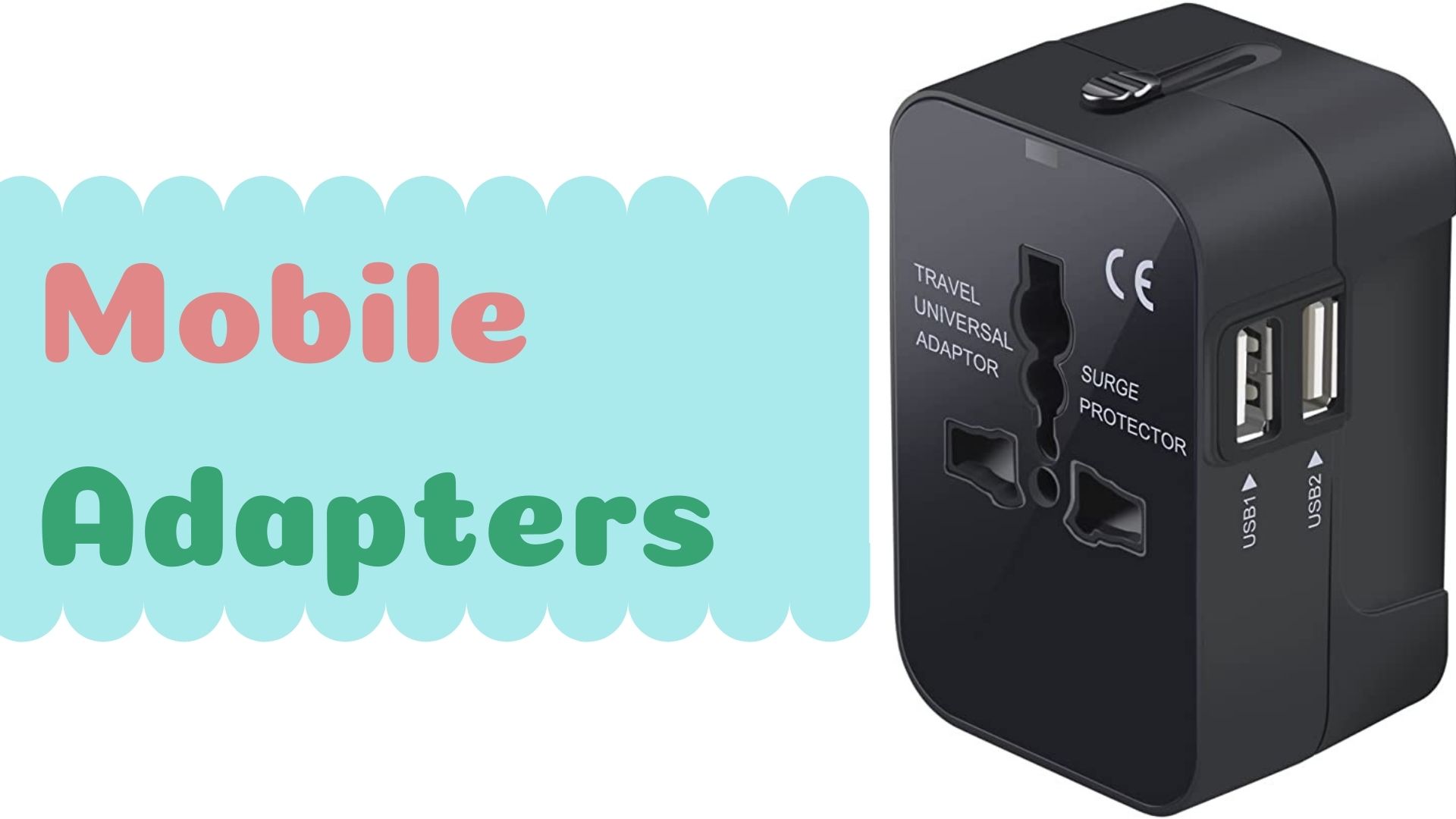 Many of us are quite passionate about traveling across the globe and whenever we suddenly get a chance, we pack “almost” everything that we’ll need but sadly we the newbies always forget 1 particular thing that happens to be one of the most important things to pack before traveling overseas, which is namely Universal Adapters.

The world is vast and diverse so there are places where your local plug pins won’t match, but a universal adapter makes it possible and saves you unnecessary headaches. Since you’re reading this, I believe you had a headache or are one of the smart people who did their homework.

Anyways, in this article, you’ll find the best of the best Universal travel adapters that will work only on Earth, so if you want to know more about those, keep reading.

Here is the list of Best Universal Mobile Charger Adapter Available In India: 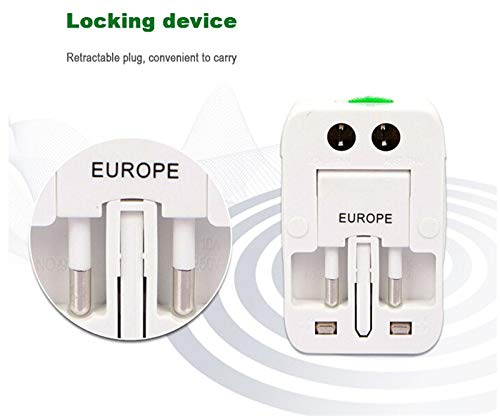 Let’s fire-off this article with a universal travel adapter from SeCro, this universal adapter is a great choice if you’re thinking about traveling overseas.

SeCro’s universal adapter also offers DC5V 1A 10W USB ports that can be used on various smartphones, laptops (recommended to be careful), and cameras; other than that, this universal adapter offers 100-200W input and 100-200 W 6A max output through the sockets.

According to the description, this Adapter can be used in over 150 countries but sadly we don’t know which 150 countries as it couldn’t be used on South African plug points but we do know that this adapter properly fits European plugs, UK plugs, American plugs, Indian plugs, New Zealand plugs, and Australian plugs.

The adapter is made up of plastic and is so-so in the durability matters. Do note that this universal adapter can be only used for indoor purposes and under no circumstances try to connect a hairdryer to it.

Also! The worst feature about this adapter is its slow charging, which is seriously slow and you won’t be able to use the phone while it’s charging as the screen wouldn’t work so purchase it only if you’re planning to charge your phone while you’re heading to bed. On the final note, this adapter won’t convert voltage. 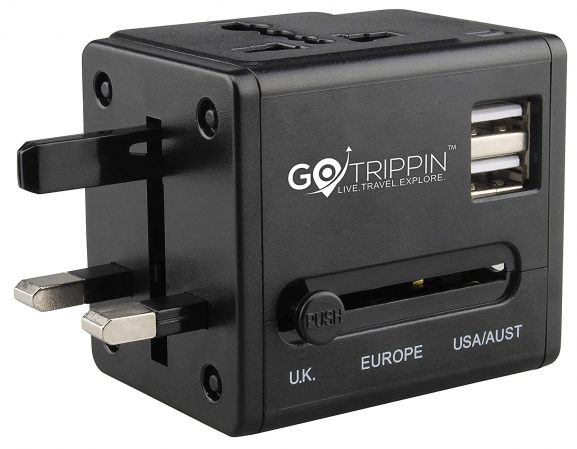 Next up we have a universal travel adapter from “Go Trippin”, this adapter costs slightly more than the SeCro’s universal adapter but compared to SeCro, this adapter is a bit better in terms of portability, durability, and the looks.

This black square of a Universal adapter comes with a cute little zipper bag which makes it easy to carry this adapter without damaging it (if not for the adapter, you can always use it for something else).

The adapter is made up of plastic that appears kind of sturdy and metallic– much like the last one, it has pins for the US, UK, Europe, and Australia; it’ll work on any nation that has plugs similar to those 4 nations.

The Adapter has a 3 part slider for various pins, and 2 fast (2.1 A) charging ports that’ll charge your phone faster than SeCro’s universal adapter.

Speaking technically, this adapter has an input of 100/240V/AC, 50/60Hz and can withstand Max load of 6A; while the output is 5V/2.5A, AC power of 600V/110 AC. This Adapter comes with shutters and surge/spike protection, much like SeCro this one is also a “Made in China” universal adapter.

Before purchase make sure that your device is with dual voltage or is available at local voltage.

Bulfyss Universal Travel Adapter All in One 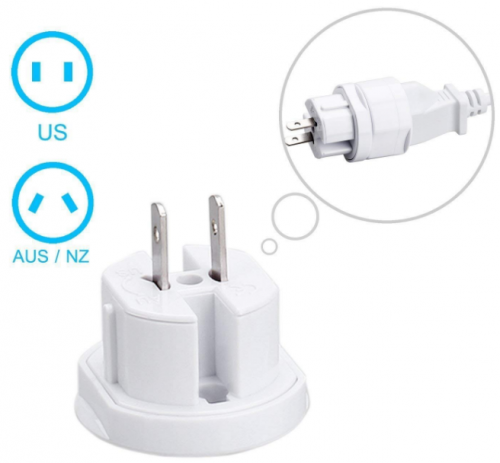 Bulfyss Universal adapter is the most unique looking universal adapter in the market. Unlike the others, this adapter is like someone created circular pieces of lego and added plug pins for maximum destruction but then decided to use it as a travel adapter.

There aren’t any input (current) specifications given due to obvious reasons and you might have to pick some other Universal adapter if you’re looking for fast-charging USB ports. For portability, you’ll get a storage tube which is a blessing as nobody wants a deadly lego piece. 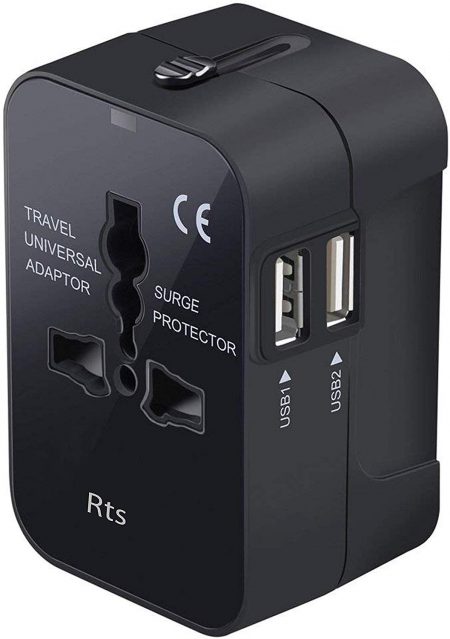 Like usual, this universal adapter supports 4 types of International sockets namely the UK, U.S.A, Australia, and Europe. It has a power rating of 6A max and a rated current of 100V-250V.

This universal adapter is CE/ROHS certified so it can automatically stop charging once the devices are fully charged; other than that, it can also automatically cut the power supply if the current exceeds 6.3A.

The best feature about this Universal adapter is that it’s quite durable, smudge resistant, and has a nice grip. And Oh! It also has dual USB ports, although they haven’t provided any pouch with this universal adapter. 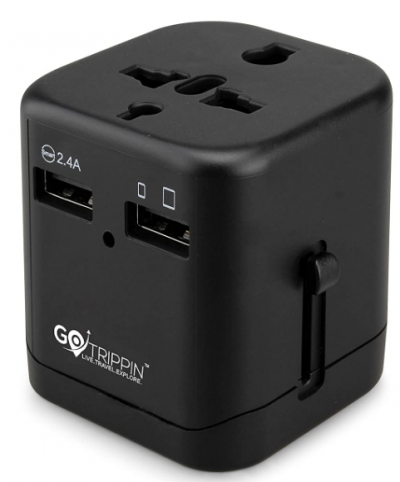 We’ve finally reached the last universal adapter in this list and since I firmly believe in going out with a bang, here we have something that has more bang than the other Adapters given in this list.

Much like the earlier GoTrippin universal adapter this one also comes with a small storage bag and is rectangular in shape– This adapter has UK, US, Australia, and Europe plugs; unlike the other universal adapters, this adapter’s socket works with Indian plugs too. All the plugs (UK, US, EU, AUS) have a slider feature to slide out the pins (I particularly liked the European Pins).

This adapter comes with 2 USB ports with a smart IC that offers fast charging and can also detect the device needing more power (comes handy while charging laptop/tablet/phone) simultaneously). This Universal adapter has an in-built surge and spike protector along with safety shutters.

We’ve finally reached the end and I’d like to thank you for going through this article, also there aren’t many universal adapters on this list as the majority of the adapters found in the market look too similar. Do leave us a comment if you find a great (Not-made-in-china) universal adapter.