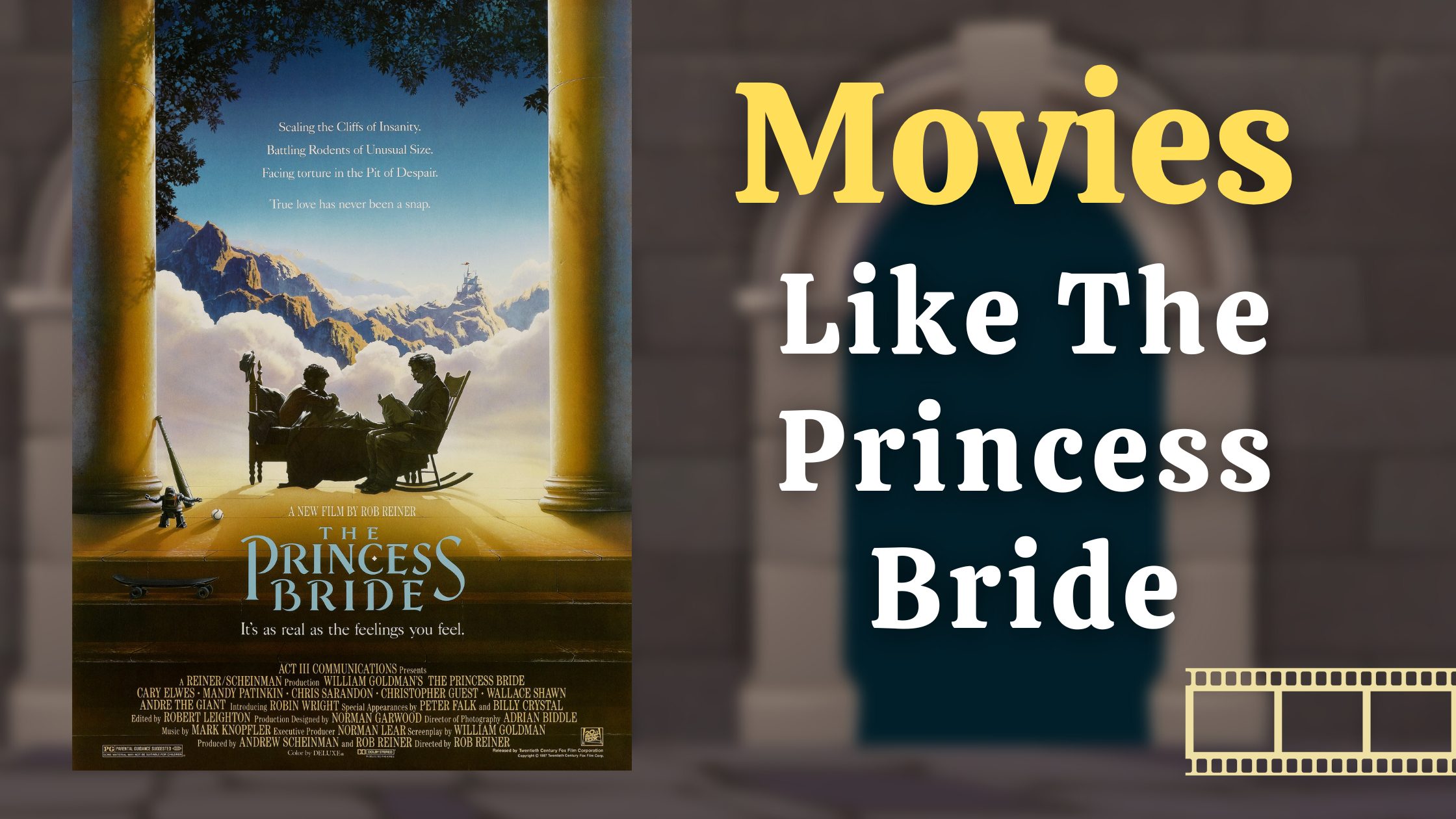 Action-adventure and fantasy have been two of the most popular genres in cinema across all eras and still continue to be so. One of the biggest hits of the year Dune is a perfect example of this. While modern technology has definitely made the genre more immersive, there have been many movies in the past that overcame the handicap and paved the way for the art of the present. The Princess Bride is one such movie. we have compiled the list of the 10 best movies like the Princess Bride.

The Princess Bride is a fairytale adventure movie released in 1987. More than three decades later, the movie still has a cult status and is often cited as “the perfect fantasy film”. This is certainly not an overstatement as The Princess Bride had everything a fantasy film strives to have. A mythical backdrop, mystical visuals, over-the-top characters, and obviously a thrilling plot to keep the viewers interested.

The story of The Princess Bride follows a loving couple and their quest to reunite with each other. The movie plays out in a narrative format as a story an old man is telling to his grandson.  Fred Savage and Peter Falk play their respective roles. The main story is about Buttercup the Princess bride, played by Robin Wright.

Cary Elwes stars as Westley, her lover who gets separated due to unforeseen circumstances. The story follows the two trying to reunite while battling multiple mythical evils and challenges. There have been some outstanding fantasy movies and here are 10 similar movies that will feel at home to you if you love The Princess Bride. 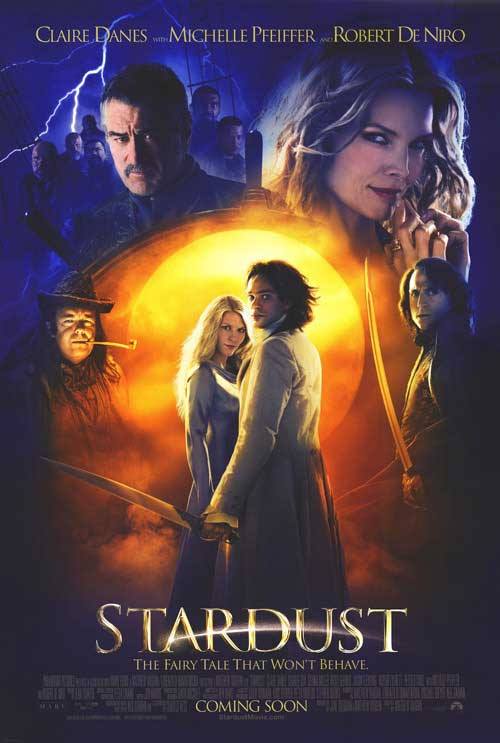 Stardust is probably the closest that any movie would ever come to being similar to The Princess Bride. This movie is not only set in a mythical background but also follows a love story trope. Released in 2007, Stardust can pretty much be considered a modern-day counterpart of The Princess Bride.

A romantic fantasy adventure movie by definition, This movie is based on a Neil Gaiman novel of the same name that was published in 1999. The movie is a faithful adaptation of the novel and follows the story of a young man going on a magical adventure to convince the woman he loves for marriage. The amazing Charlie Cox stars in the lead role of Tristan, a commoner living in a fictional town called Wall. He loves Victoria (Sienna Miller) and wants to marry her.

Victoria agrees to marry him but only if he can retrieve a shooting star they witness together. Tristan sets out to retrieve it, only to find it personified as Yvaine (Claire Danes). Unbeknownst to Tristan, he is not the only one after the star. A dying king, his sons, and three witches are all hunting for Yvaine due to motives of their own.

Stardust features an exciting supporting cast of performers like Robert De Niro, Ricky Gervais, Michelle Pfeiffer, Henry Cavill, and Ian McKellen among others. The cast along with the great visuals make for a fun and adventurous ride for the fans of the genre. 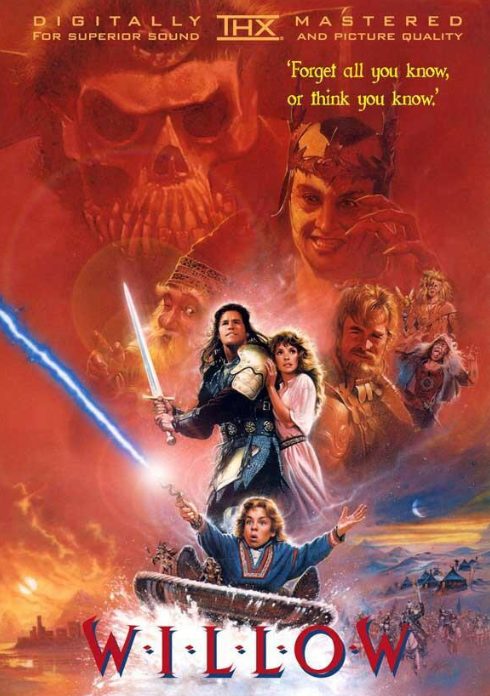 While Willow is not seen as a technical masterpiece by critics, viewers still hold it in their hearts very dearly. If you only care about having a fun adventurous time instead of ratings, then Willow will never disappoint you. Willow has been in the news recently as a series based on the movie will be coming out next year on Disney+. So now would be the perfect time to take a look back at the original before the modern interpretation arrives.

Willow’s plotline is set in a darkly magical world of Nockmaar ruled over by an evil Queen Bavmorda (Jean Marsh). Bavmorda aspires to control the entire world but a Daikini child with a special birthmark stands in her way. Prophecies have foretold of this child being the downfall of the queen. Out of fear, the queen imprisons all Daikini women. A child is still born and smuggled outside by the mother and the midwife.

The baby falls into the hands of Willow (Warwick Davis), a young farmer belonging to the race of the little people Newlyns. The movie follows Willow’s struggles and battles to protect the baby from evil. Willow definitely has a darker tone than The Princess Bride but has a fair share of humor as well. The backdrop of mystical locations and characters is common in both the movies. 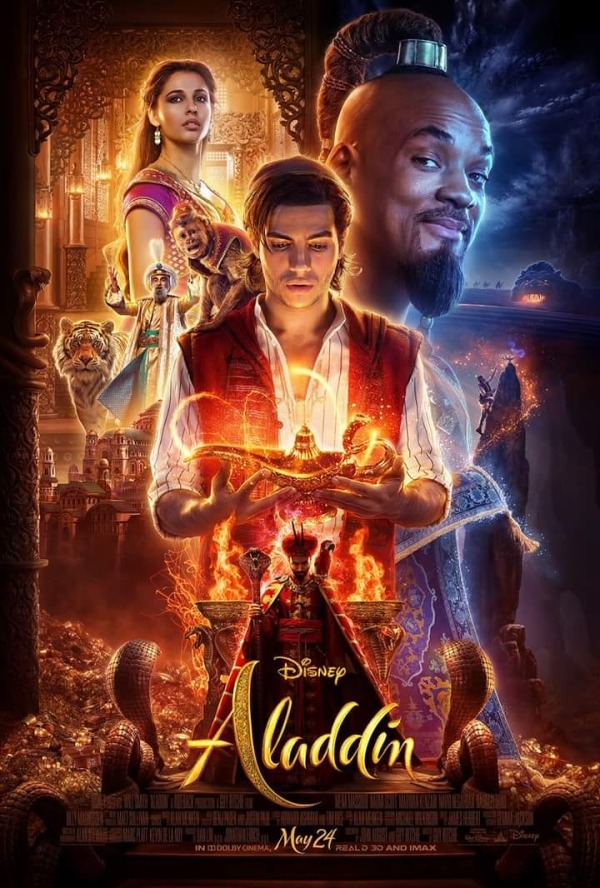 With the hype it created both before and after its release, it’s highly unlikely you haven’t heard of the 2019 release Aladdin. The story of Aladdin has been the base for plenty of adaptations and the latest one has plenty to offer for both new and old fans. It is also one of the best choices which is closest to movies like Princess Bride.

Guy Ritchie served as the director for this movie while Mena Massoud starred in the titular role of Aladdin. Naomi Scott reprised the role of Jasmine and Will Smith was in as everyone’s favorite character Genie. The basic plot of the movie was kept unchanged from its predecessors and followed Aladdin’s adventures with Genie in his journey to save his love Jasmine from evil.

Marwan Kenzari stars as Jafar, the main antagonist plotting to acquire the power of Genie to rule over Agrabah. The cast does a wonderful job, the visuals are stunning, and all of it makes up for a fantastic experience. While it is far from perfect, fantasy fans will find it easy to ignore the minor flaws.

The Wizard Of Oz 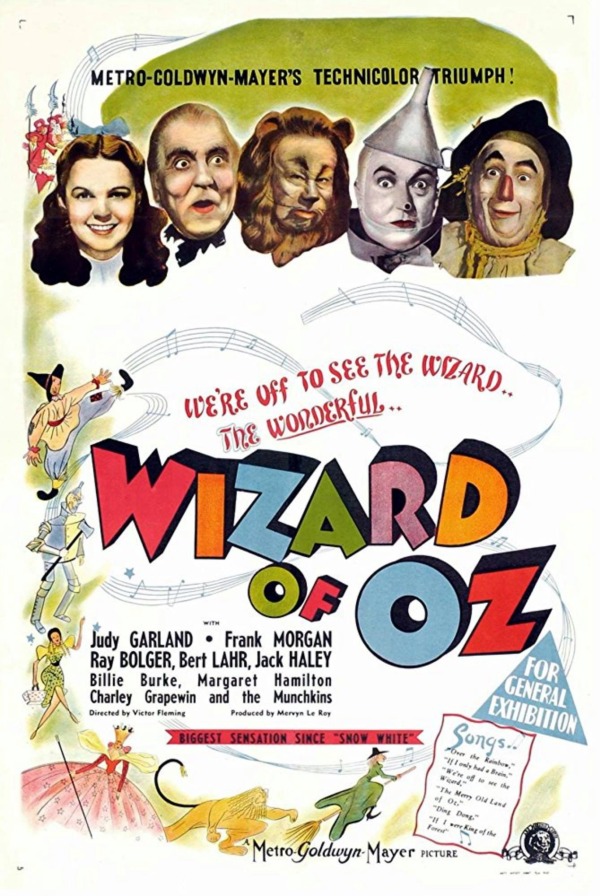 The Wizard Of Oz is an all-time classic and only a few would beg to differ. The 1939 release was not just ahead of its time technically but also offers some of the most magical moments and storytelling this genre has to offer to date. As per the US Library of Congress, The Wizard Of Oz still stands as the most-watched movie ever in existence.

The movie is based on a 1900 fantasy novel of the same name, written by L. Frank Baum.  The story is mainly focused on Dorothy Gale and her dog Toto who both end up in The Legend Of Oz after a tornado. Most of the premise follows her search for The Wizard Of Oz who can take her back to her world.

All this while, she befriends strange creatures while battling The Wicked Witch. Judy Garland plays the main character of Dorothy while Frank Morgan, Margaret Hamilton, Roy Bolger, Jack Haley feature in other major roles. 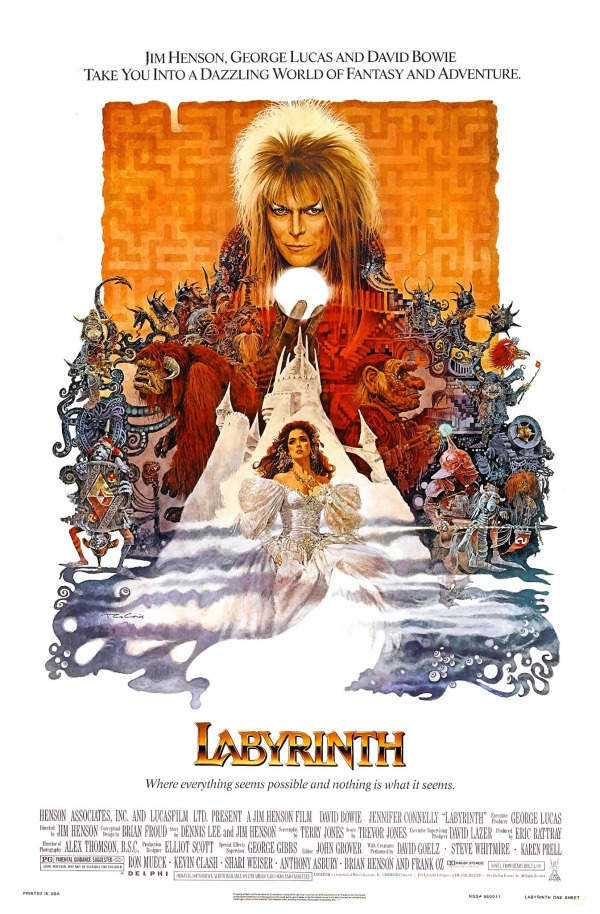 Labyrinth is another fantasy film that has established its spot as a cult classic after poor initial response and for all the good reasons. This movie was released in 1986 and was considered a critical and commercial failure on the box-office but a huge hit on the DVD and home video. The latter has helped the film gain a cult following.

The movie features the late great David Bowie and a young Jennifer Connelly in the main roles. Connelly is in as Sarah Williams, who loses her brother Toby (Toby Froud) after wishing he was taken away by goblins. Bowie stars as Jareth, the king of the goblins who in fact end up abducting Toby. Sarah has to solve Jareth’s maze within 13 hours to save her brother. And that’s the story this movie tells while being surrounded by many mystical beings and locations. 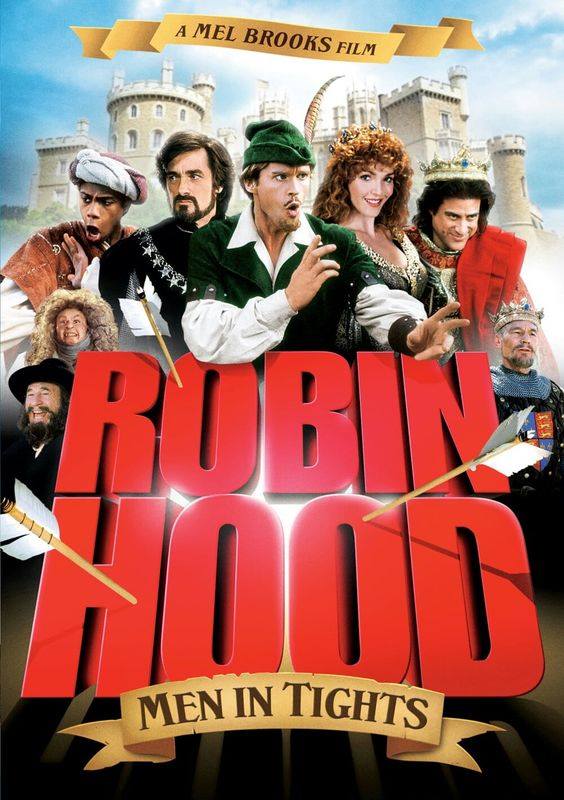 Cary Elwes plays the titular role of Robin Hood, who is imprisoned in Jerusalem. Upon his escape, Robin finds out his family has perished and his homeland is being oppressed by the evil Prince John (Richard Lewis). But before the Prince, the Sheriff Of Rottingham wants Robin assassinated.

The story follows Robin along with his friends finding the treasure his father had left a key to. Meanwhile, he has his love interest Maid Marian (Amy Yasbeck) who is stuck with a chastity belt and needs a savior. Men In Tight is a fun, satirical, and unusual tale full of fantasy, and if that doesn’t sound like the perfect recipe then what else would? 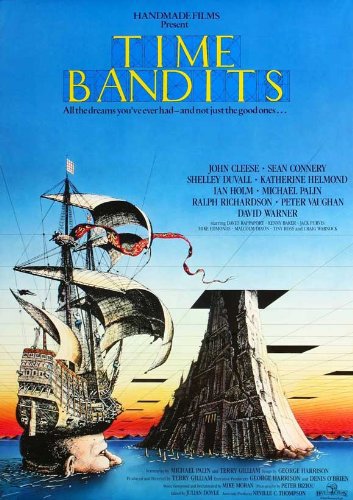 Time Bandits was the first installment in Terry Gilliam’s famous Trilogy Of Imagination which was followed by Brazil and Adventures of Baron Munchausen. This movie can be described as an escapist fantasy adventure and features tonnes of references from different eras and fantasy worlds. From Robin Hood to Napoleon, the movie has a lot in its mystical basket for the viewers.

The centerpiece of the story is Kevin, an 11-year old history buff played by Craig Warnock. Kevin notices weird things happening around as a knight and six dwarves appear in his room over the succession of two days.

They take Kevin on an adventure while trying to loot treasures across different eras of history and myth. A floating head called The Supreme Being meanwhile tries to catch up with them. 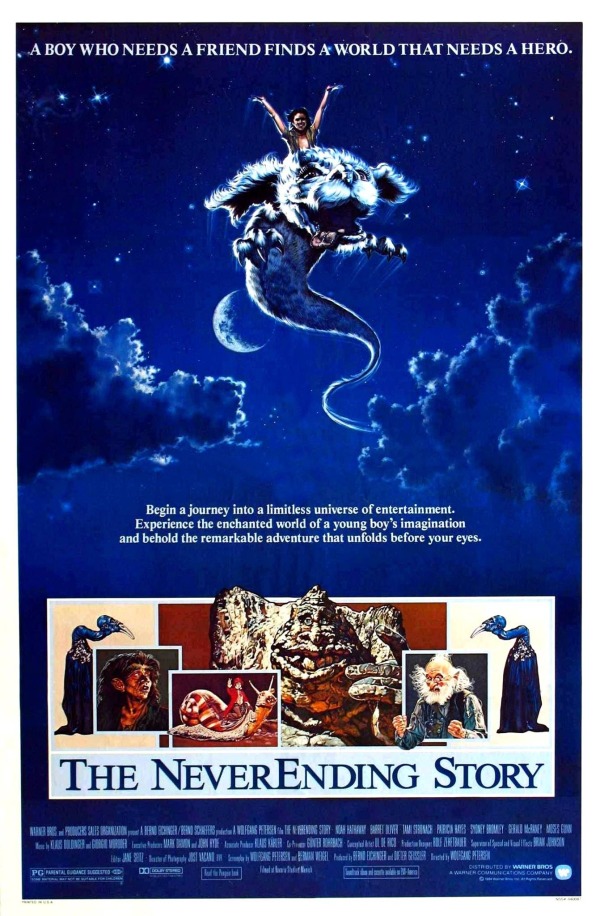 The NeverEnding Story is an English-language German film directed by Wolfgang Petersen that was released in 1984. It is a fantasy flick based on a novel of the same name by Michael Ende. The NeverEnding Story was the most expensive movie to be made outside of the US when it was released. Its effects and quality have stood the test of time and can be thoroughly enjoyed by the modern generation.

The story is centered around a shy kid Bastian Bux and a book he reads named The NeverEnding Story.  The book talks of Fantasia, a land being devoured by The Nothing, and a human child that is supposed to be the savior. Bastian finds his own description inside the book and gets engulfed in the world of Fantasia. Barret Oliver stars as Bastian along with Tami Stronach, Noah Hathway, and Patricia Hayes in other major roles. 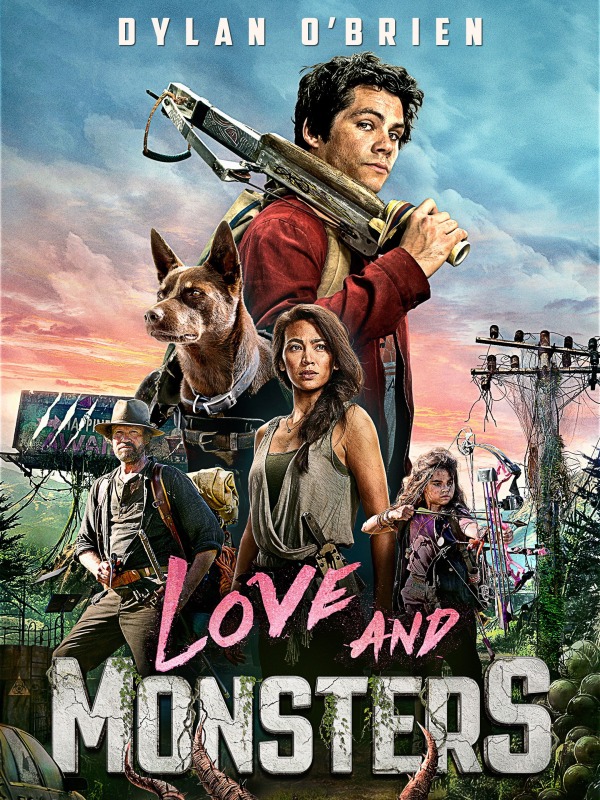 Love And Monsters is the newest name to be included on the list and just the one for you if you want to watch something modern. This movie was released in 2020 after a whole 8-year long development. Michael Matthews directed this adventure film starring Dylan O’Brien and Jessica Henwick in the two lead roles.

The movie is set in a dystopian Earth where an asteroid’s chemical fallout causes cold-blooded animals to turn into monsters. This movie is one of the best movies like The Princess Bride.  As they are wiping out humanity, Joel Dawson (Dylan O’Brien) gets separated from his girlfriend Aimee (Jessica Henwick). 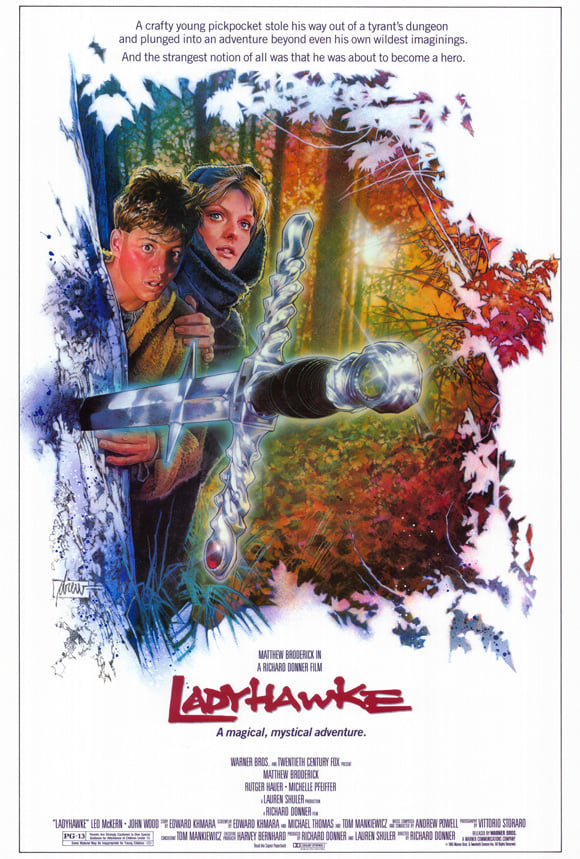 Ladyhawke is a fantasy film set in the medieval era of Aquila, that was released in 1985. The story begins with Phillipe Gaston, a thief, escaping from dungeons right before he is to be executed. Gaston ends up getting recaptured by the Bishop’s guard but is saved by Etienne Navarre, a former captain. Navarre asks Gaston to help him sneak into Aquila as he wants to kill the Bishop of Aquila.

As it turns out, the Bishop has used black magic to keep Navarre separated from his love Lady Isabeau out of his obsession with her. According to the spell, the pair can never be together apart from at twilight. Matthew Broderick is in as Phillipe Gaston while Rutger Hauer and Michelle Pfeiffer star as the lovers Etienne and Isabeau. From dark magic to people turning into hawks and wolves, LadyHawke has it all!

The human brain loves adventure and fantasy. No wonder we have a natural fascination with exploring new places and tackling new mysteries. The Princess Bride is a cult fantasy adventure movie and has an immense fan following all over the world. We have listed all the best movies like the Princess Bride.

Everyone involved in the making of this masterpiece rightfully deserves this love. Without the technology that we have today, they managed to create something that will be remembered for ages to come. If you are a fan of this classic movie and the genre, the aforementioned movies are guaranteed to be among your new favorites.