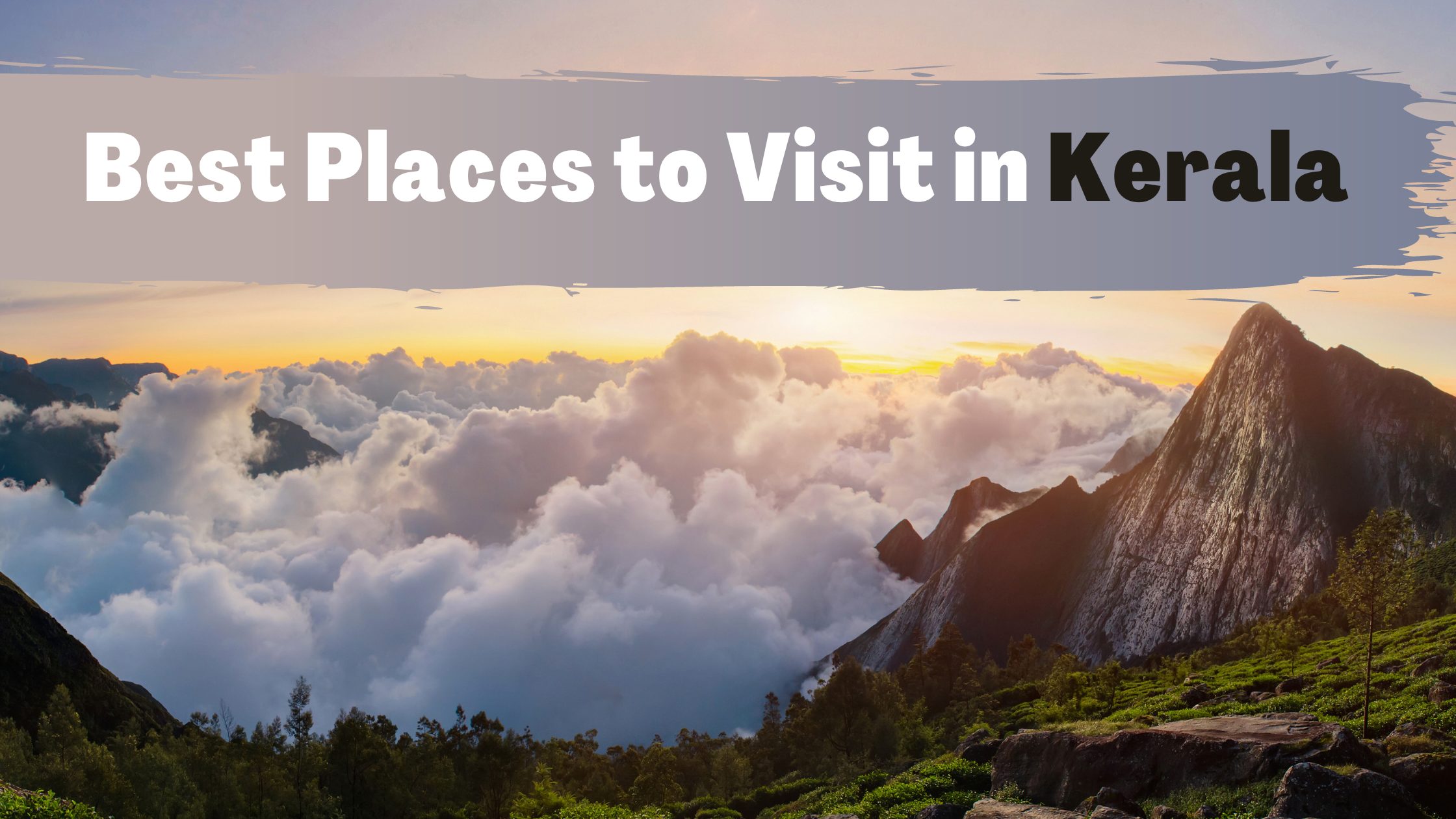 Kerala, a state situated on the southwestern tip of India, is one of the most popular tourist destinations in the country. Kerala is known for its pristine beaches, lush green landscapes, and rich cultural heritage. Tourists from all over the world come to Kerala to experience its unique beauty. There are many beautiful places to visit in Kerala.

Best Places to Visit in Kerala 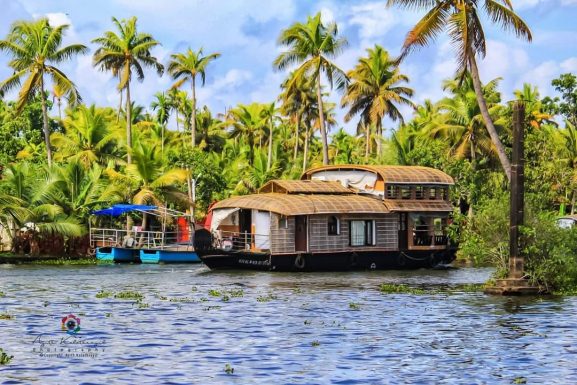 It is popular for its pristine beaches and backwaters. Furthermore, Alleppey is also known as the Venice of the East. The town has a long history and was once an important trading center. 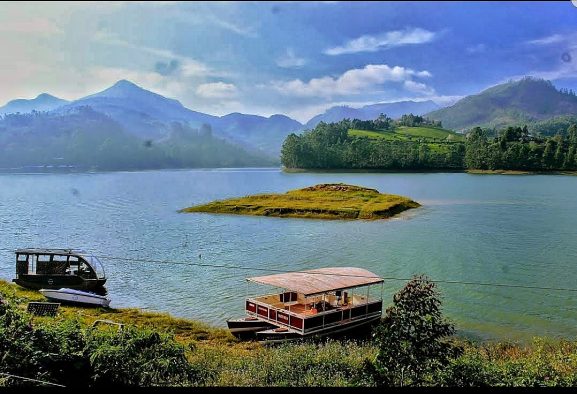 Munnar is a small town located in the Idukki district of Kerala. In addition to this, Munnar is known for its tea plantations and stunning landscapes. 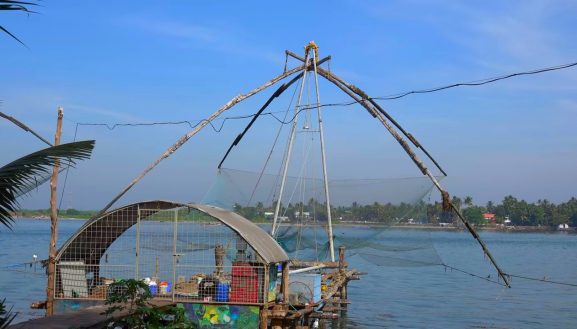 Kochi is a major port city located in the state of Kerala. It is one of the most popular tourist destinations in India. Kochi is known for its beautiful beaches, backwaters, and historic monuments. The city also has a thriving nightlife. 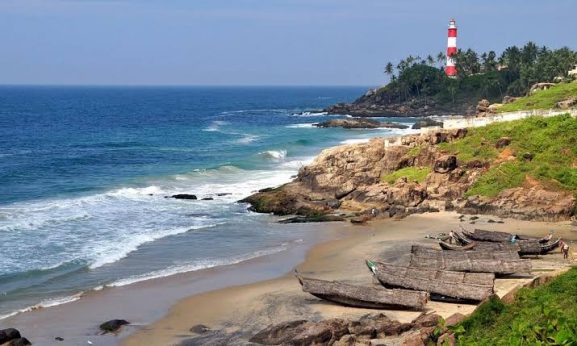 Kovalam is a small town located in the state of Kerala. It is situated on the Malabar Coast. Kovalam is known for its pristine beaches and Ayurvedic resorts. Furthermore, it is also home to many yoga and meditation centers. 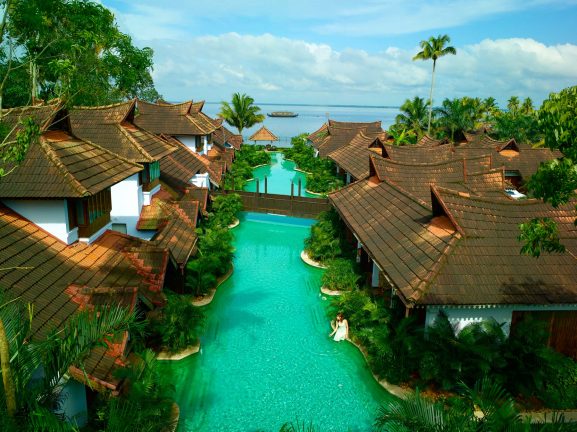 Kumarakom is a small town located in the Kottayam district of Kerala. It is a popular tourist destination and is known for its beautiful backwaters. Kumarakom is also home to the Kerala Bird Sanctuary, which is a haven for bird watchers.

Kumarakom is accessible by road from Kottayam and Kochi. The nearest airport is Cochin International Airport, which is about 85 km away. Kumarakom is a great place to unwind and relax. It offers plenty of opportunities for boating, fishing, and bird watching. The town also has several Ayurvedic resorts, where you can avail yourself of traditional Kerala treatments. Kumarakom is an ideal place to enjoy a quiet holiday in Kerala. 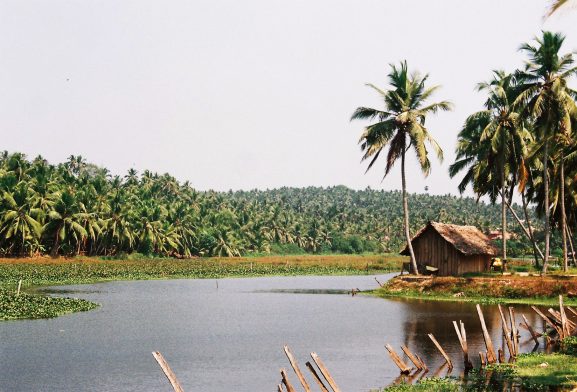 Trivandrum is located on the west coast of India near the extreme south of the mainland peninsula. The city lies along the Tampura River and is bounded by the Arabian Sea to its west and southwest. 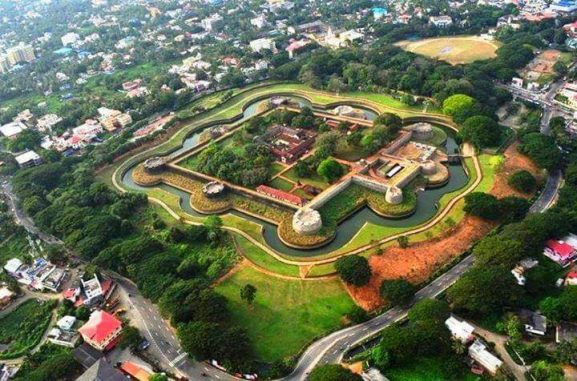 Palakkad Fort is a fort located in the Indian state of Kerala. Built by Hyder Ali in 1766. The fort is also known as Tipu’s Fort. Furthermore, it is named after Hyder Ali’s son, Tipu Sultan. The fort was renamed “Palakkad Fort” after the British captured it in 1784. It is now a protected monument under the Archaeological Survey of India.

The fort was built to control the route from Coimbatore to Palghat and ultimately to Kozhikode. Thus, the fort played a significant role in the Anglo-Mysore Wars. It was during one of these wars that the British captured the fort. The fort has an area of about 45 acres and is built in the Indo-Islamic style of architecture. It has a rectangular shape with four massive bastions at the corners. The walls of the fort are about 15 feet thick and 50 feet high.

There are two temples inside the fort, one dedicated to Lord Krishna and the other to Lord Rama. There is also a mosque inside the fort. The mosque is now a library.

The Palakkad Fort is open to visitors from 9 am to 6 pm on all days except Mondays. Entry to the fort is free for all Indian citizens. Foreign nationals must pay a small fee for entry. 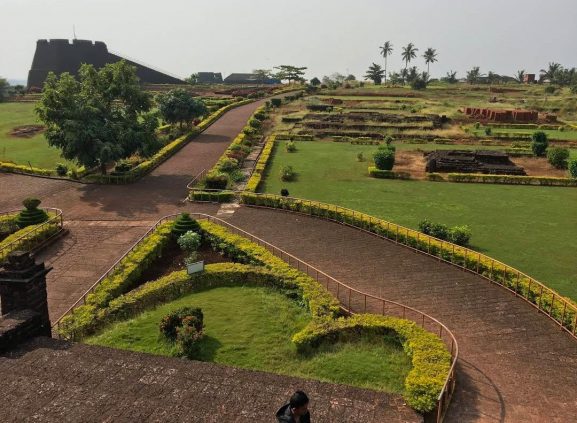 Bekal Fort is a fort located in the Indian state of Kerala. It is the largest fort in the state and is present at Bekal village in the Kasaragod district. It has a length of 220 meters (720 ft) and a breadth of 180 meters (590 ft). The fort walls are about 40 feet (12 m) high. There is a well inside the fort. During the war time, it was a source of water for the soldiers. The fort has an observation tower, which provides a panoramic view of the surroundings.

The Bekal Fort was one of the important forts belonging to the Kingdom of Bednore. It was under the rule of Shivappa Nayak, who was the son of Kanthirava Narasa Nayaka, the founder of the Kingdom of Bednore. In 1763, after the death of Hyder Ali, the fort came under the control of his son, Tipu Sultan. However, in 1790, the British East India Company took over this place.

The Bekal Fort is a protected monument under the Archaeological Survey of India. Besides this, it is also a part of the Bekal Fort Beach National Park. 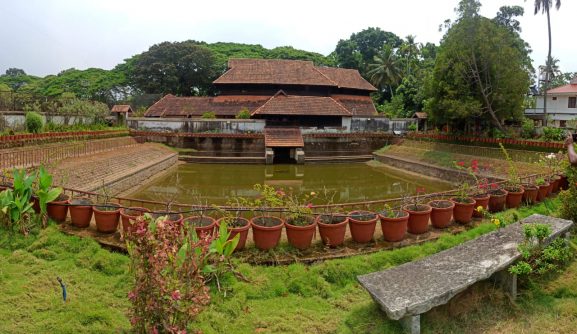 Krishnapuram Palace is a palace located in the Indian state of Kerala. It is at the famous Krishnapuram village in the Alappuzha district. The palace is a marvel by Marthanda Varma, the king of Travancore, in the 18th century. It is a two-storeyed building with a rectangular plan. The palace has several murals and paintings, among the best in Kerala. The palace also has a museum, which houses a collection of artifacts belonging to the Travancore royal family.

Varkala is a beautiful beach town located in southern India. The town is popular for its long stretch of sandy beach, which is a spot for swimming, sunbathing, and surfing.

Varkala is also home to the Janardana Swami Temple, which is one of the most important Hindu temples in Kerala. It is Lord Vishnu’s temple, and it is over 2000 years old.

If you are looking for a relaxed and scenic place to spend a few days, then Varkala is the perfect destination for you. There are plenty of things to see and do in this charming town, and you are sure to enjoy your time here. 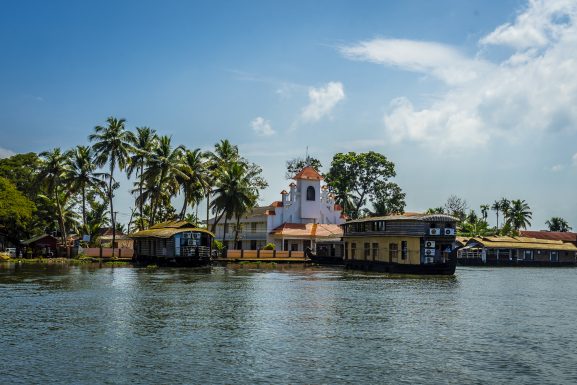 Kumarakom Bird Sanctuary is located in the state of Kerala, India. It lies on the banks of the Vembanad Lake, and it is a popular destination for bird watching. Additionally, the sanctuary is home to a large variety of birds, including migratory birds from Eurasia.

The Kumarakom Bird Sanctuary covers an area of 14 acres (5.7 hectares). Built-in 1951, it is now a part of the Kottayam District. The sanctuary is open to visitors from 6 am to 6 pm. 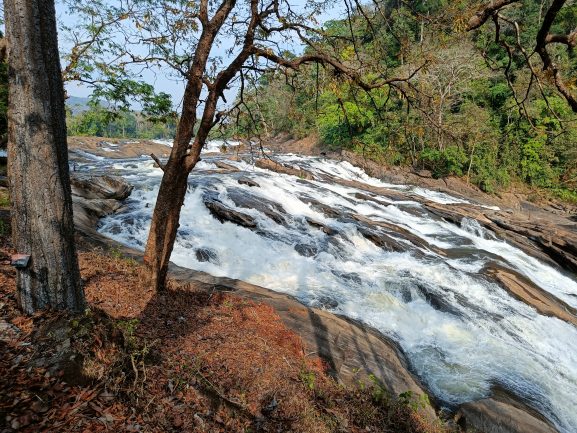 Athirapally Falls and Vazhachal Falls are two waterfalls located in the state of Kerala. The falls line the Chalakudy River, and they are a popular destination for tourists.

The Athirapally Falls is the larger of the two falls, and it is located about 30 kilometers (19 miles) from the city of Thrissur. Moreover, the falls have a height of 80 meters (262 feet), and it is one of the most popular tourist attractions in Kerala.

The Vazhachal Falls is located about 5 kilometers (3 miles) from the Athirapally Falls. It has a height of 50 meters (164 feet). Present right in the center of the dense forest, it is a popular spot for hiking and bird watching. 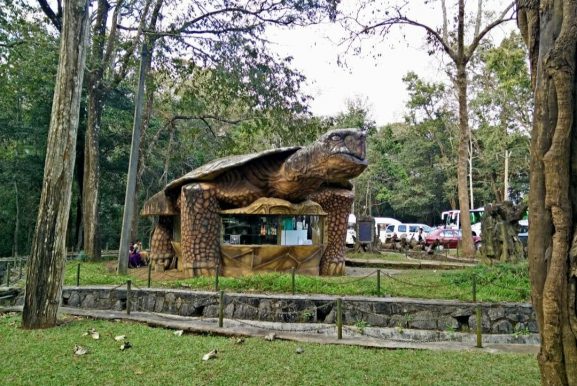 Right in the Western Ghats, it is a popular destination for wildlife enthusiasts. Moreover, the park is home to a large variety of animals, including tigers, elephants, leopards, and deer. The Periyar National Park covers an area of 925 square kilometers (357 square miles). 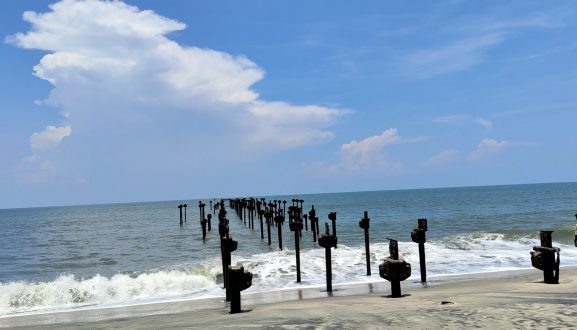 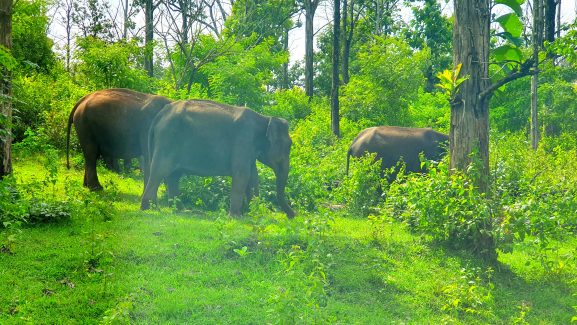 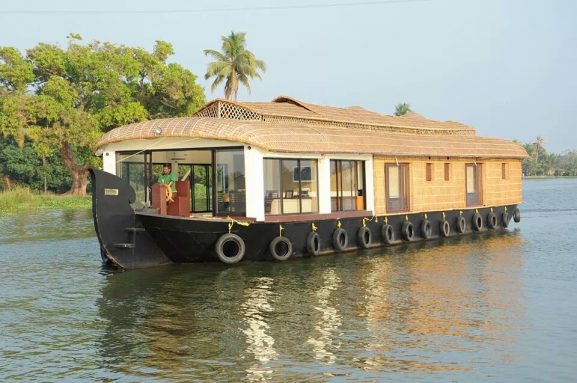 The Kerala backwaters are a network of canals, rivers, and lakes located in the state of Kerala. Moreover, they are a popular tourist destination, and you can explore them by taking a houseboat cruise.

Spread over an area of 900 kilometers (560 miles), the backwaters are a part of the Inland Waterways Authority of India. They are functional for transportation, fishing, and tourism.

Kerala is a beautiful state in India that is home to many scenic and interesting places. If you are looking for a relaxing or adventurous vacation, then Kerala is the perfect destination for you. There are plenty of things to see and do in this charming state, and you are sure to enjoy your time here.