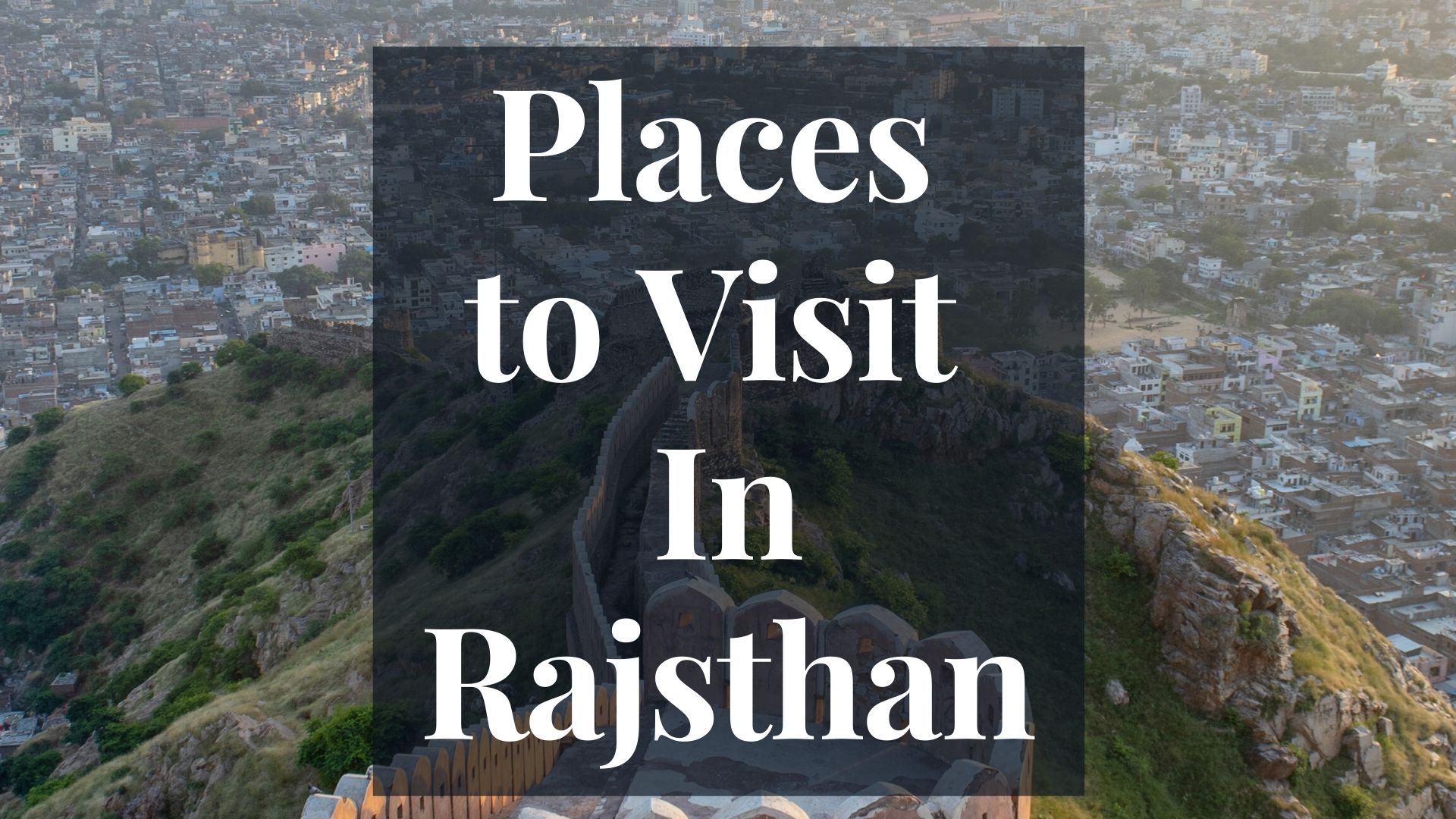 Rajasthan, formerly known as Rajputana or the land of the kings, is India’s largest state. Tracked at the spearhead of Indian civilization, Rajasthan has seen the age of kings hence explaining the moniker ‘the land of kings.

You’d want to cover the whole state, but if not enough time for that,

Here are the Top 10 Must-visit Tourist Places in Rajasthan: 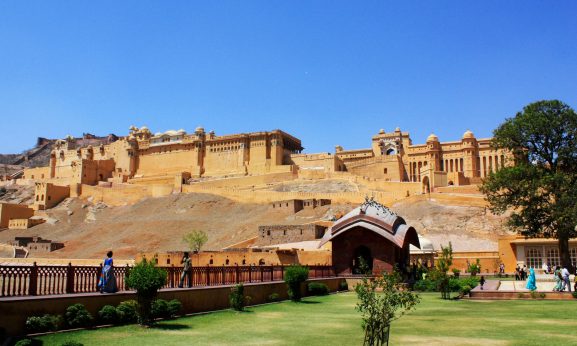 The Kachwaha Rajput Ruler, Sawai Jaisingh II, the ruler of Amber, founded the capital of the Rajasthan state, Jaipur in 1727 and hence it’s named after him.

It was one of the earliest planned cities of modern India, planned according to the Vedic Vastu Shastra. It’s also known by the nickname ‘Pink City of India’ which is due to the distinctive color schemes of the buildings.

Well architected streets and thorough and artistic design of the structures make it a top preferred tourist location in India which also forms a part of the west Golden Triangle tourist circuit.

The 2008 Conde Nast Traveller Readers’ Choice Survey ranked Jaipur No.7 amongst the best places to visit in Asia. It has lots to offer to even the most average tourists.

Forts, monuments, temples, Gardens, museums, and vast marketplaces bring tourists from around the world to come across the food, entertainment, and frisk of this marvelous town. It’s also home to numerous arts and crafts with over 20 unique specializations.

Top places to see in Jaipur:

Udaipur, formerly the capital of the Sisodiya Rajputs of Mewar, is a city founded in 1559 by Maharana Udai Singh II. It sits around an arrangement of artificial lakes and is known for regal royal residences.

Popularly known as the “City of Lakes” because of its sophisticated lake system, it’s also known as the most romantic spot or the Venice of the East and is a well-known traveler destination known for its saga, culture, picturesque locations, and the Rajput- age fortresses.

It’s also recognized for its galleries, museums, natural locations, and gardens, historic forts, and palaces, architectural temples, also traditional fairs, festivals, and structures but is mostly famous for its palaces that exemplify the finesse of Rajputana Style architecture.

With a well-designed city and welcoming citizens, Udaipur has a lot to show to its tourists.

Top places to see in Udaipur: 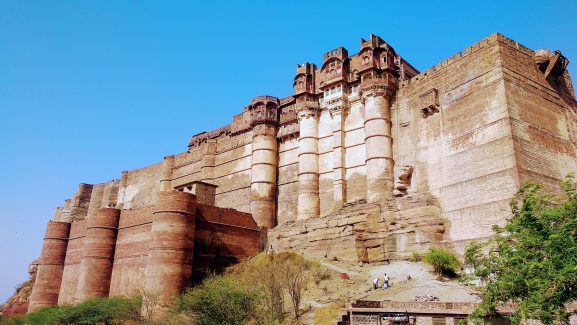 Jodhpur was founded as Marwar’s new capital, in 1459 by the Rathore Rajput Ruler, Rao Jodha Singh of Marwar. It’s a famous tourist destination, consisting of many palaces, forts, and temples, set in the heart of the Thar Desert.

It’s called the Sun City as it enjoys bright sunny weather all year round and as Blue city, because houses here are typically painted in a blue hue probably to escape the heat or for adornment. It’s also said to be Rajasthan’s cultural capital.

Jodhpur has been featured in numerous tourism magazines and documentaries and in 2014 topped the list of most extraordinary places to stay by lonely planets. The various hill forts, palaces, and the old walled city are just a few attractions from the mass that this extraordinary city offers.

Top places to see in Jodhpur: 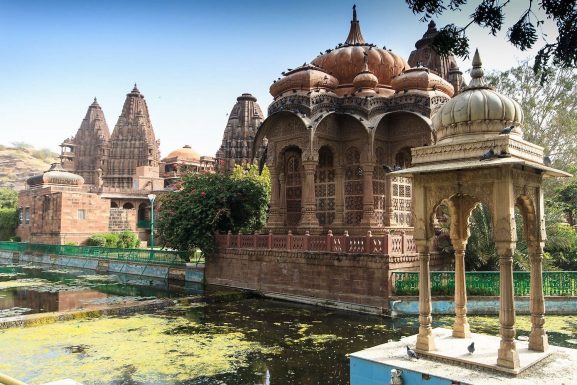 Jaisalmer was founded by the Bhati Rajput monarch Maharawal Jaisal Singh in 1156 AD and gets its name from the gold-leaf sands of the Great Indian Desert and the identical color sandstone utilized in the city’s architecture.

It’s nicknamed “The Golden city” which originates from its view during the day, and sits on the edge of yellowish sandstone, crowned by the ancient Jaisalmer Fort.

This is a popular spot among tourists because of its spectacular architecture and diverse arts and crafts which are unique to this region. The one of a kind characteristic of the city is the architecture. The fort has many restaurants that offer Italian, French, and local cuisines.

Top places to see in Jaisalmer: 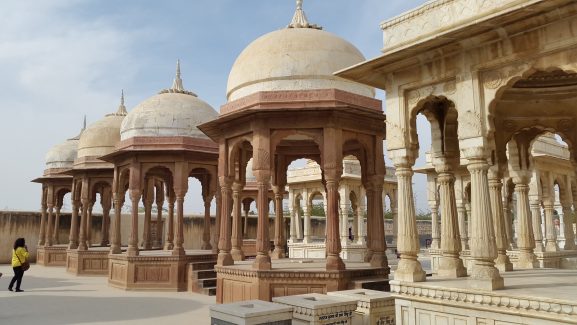 The city of Bikaner, established in 1488 by Rao Bika, is surrounded by the Thar Desert. The city is recognized for the 16th-century Junagarh Fort, a huge multiplex of decorative structures and galleries.

At present Bikaner is an additional major tourist destination and is identified for its strongholds and food. It is the one town you should visit if you want to experience the authentic taste of Rajasthani cuisines.

Top places to see in Bikaner: 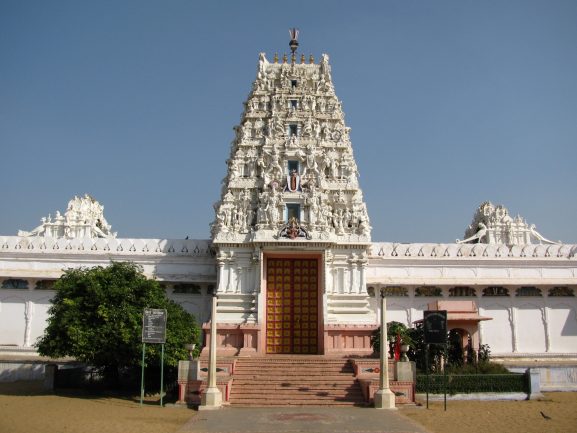 One of the oldest cities of India – the holy City of Pushkar is many times described as the king of pilgrimage sites in India. It’s located on the shores of Pushkar Lake, created by the tears of Lord Shiva, whose origin is not known. It’s popular for its temples and numerous Ghats which are frequently visited by hundreds of tourists during the once-a-year bath.

The most eminent attraction of it is perhaps the yearly camel fair. It is a five-day bazaar held where people buy and sell cattle. But that’s not all; the fair is home to numerous tourist crowds, attracted because of the music, dance, and numerous events that are held during the fair. Camel contests are one of the chief charms as well.

Top places to see in Pushkar 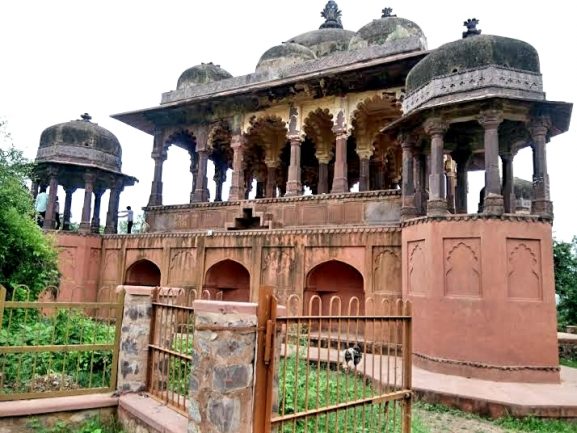 Sawai Madhopur, founded in 1763, was built by Maharaja Sawai Madho Singh of the Kachwaha Rajputs. Just 2 attractions have made this city a must-visit place in Rajasthan.

One ought to likewise visit the Ranthambore Fort, a part of the UNESCO world heritage site, located in the Ranthambore National Park forests. It was established by Raja Sajraj Veer Singh Nagil in 944 AD. The extensive cultural history guzzled in this ancient architecture is indeed a must-visit. 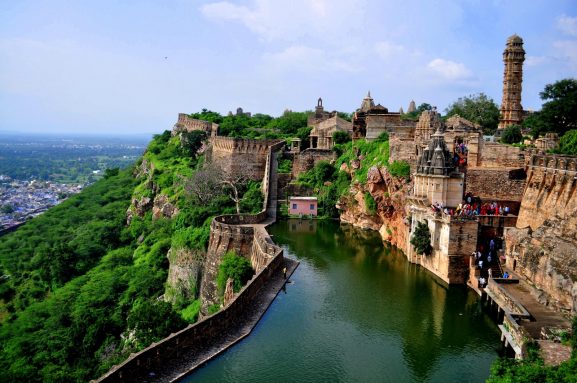 Also known as Chittor, the ancient city of Chittorgarh is said to have been established by the Maurya Dynasty but rose to importance after it was made the capital of Mewar, when, in 734 AD, the Ruler of the Sisodiya Rajput Clan of Mewar captured it.

It’s the source of numerous astonishing warriors and historic personages like the Great Maharana Pratap and the Hindu saint, Meera Bai.

One of the major places to visit in Chittorgarh is the honey-colored Chittorgarh Fort, the largest fort in India, which was established by the 1st Sisodiya Rajput, Ruler Bappa Rawal, in the 7th century.

After visiting you will witness Rajput style architecture at its best. The city, being an ancient place, has numerous palaces, temples, and forts, displaying few of the most advanced architectural designs and artistic mastery.

Top places to see in Chittorgarh: 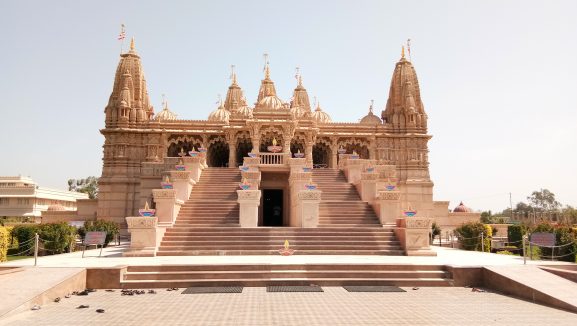 Taking pride in being the only hill station in the desert state, Mount Abu is set on a high plateau of the Aravalli Range. It’s surrounded by forest, offers a comparatively cool climate, and watches over the arid plains below.

Mount Abu, known as the Arbuda Mountain, has been noted in the Hindu Epic Mahabharata and is famous as the place where the Great Sage Vasistha retired.

The hill station houses many ancient sites and temples, is frequently visited by many pilgrims, along with many forts and lakes. The place is heavenly for the sun-burned people because of its lush green surroundings and numerous picnic spots. 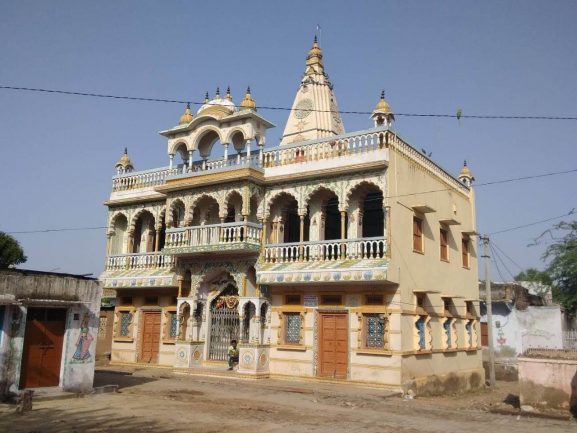 Surrounded by Aravalli ranges, Ajmer is a city oozing in both culture and history. It lies near a major Hindu pilgrimage site, Pushkar, and the shrine of Khwaja Moinuddin Chishti’s home, which makes it a pilgrimage site for both Hindus and Muslims. A gallery at the Indo-Saracenic–style Mayo College displays art and taxidermied birds.

It’s not only a pilgrimage site but also a home of numerous captivating historic sites and hence welcomes tourists from all over the world. Ajmer was selected as a heritage site for the HRIDAY – Heritage City Development and Augmentation Yojana, scheme of Government of India, in 2015.

Top places to see in Ajmer: 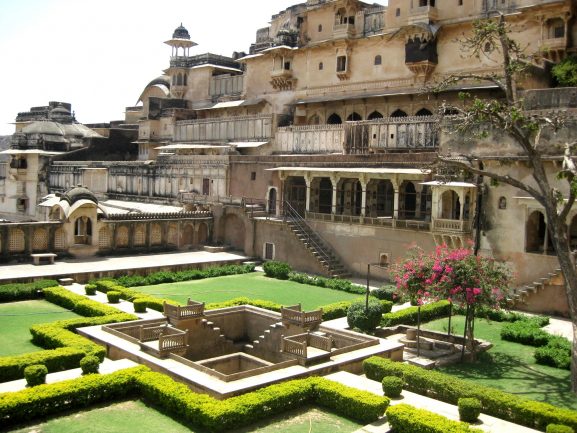 Bundi is famous because of its palaces, forts, and natural beauty. Its structures, built-in AD 1354, are very memorable and have a traditional ambiance adorned with historic signs. It has lakes, Kunds and many natural things.

The most famous place of Bundi is the Taragarh Fort. It is the most impressive structure and thus it is called ‘Star fort’ as well. The Bundi Palace is another lavishing yet traditional palace, which was built by Rani Nathavatji in 1699.

Top places to see in Bundi 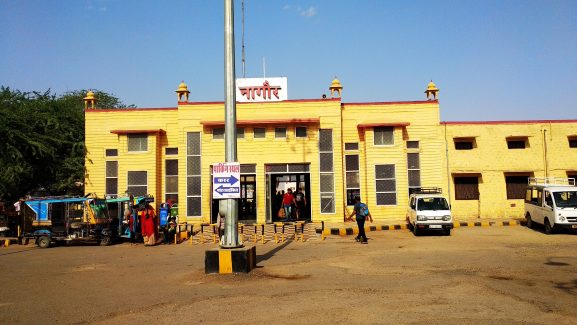 Other than being home to countless shrines, forts, and palaces, the city of Nagaur holds a great significance in the history of the epic Mahabharata. Referring to the Ahichhatrapur Kingdom, previously conquered by Arjun, the same area happens to be the present Nagaur district.

As it’s significant for its history, it’s a must for all the history buffs to visit the district of Nagaur, where an individual cannot ever fall short of historical tales.

Top places to see in Nagaur 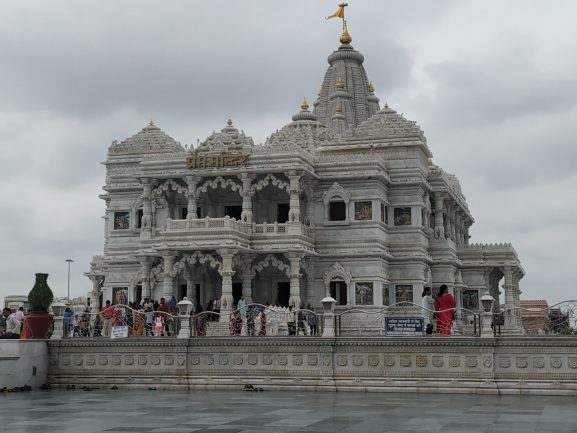 A hidden gem, Bharatpur offers an amazing experience for the people who love to indulge in the best of birdwatching at it’s Bird Sanctuary and is much famed as the bird paradise most of the time.

A UNESCO World Heritage Site and one of India’s top bird sanctuaries, it was formerly a duck-hunting reserve of the kings. More than 370 species of birds can be found there, but most importantly, the park is one of only a few known wintering habitats of the Siberian Crane.

Bharatpur has always been loved whenever visited by someone because it has all things of pure bliss and beauty.

Top places to see in Bharatpur: 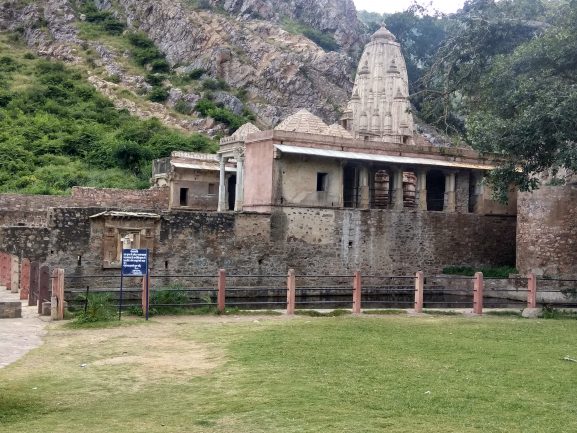 Alwar supposedly is the oldest kingdom and rich in its cultural heritage. Surrounded by the Aravalli Range, Alwar serves as one of the best winter getaways with a perfect balance of nature, adventure, and luxury. It’s famous for royal architecture and exquisite temples.

Alwar is a hub of tourism with several lakes, forts, historical Havelis, and natural reserves. One of the major tourist attraction is the Mega Alwar trade fair, held at Dussehra ground annually. Alwar is also known for its hand-made Papier-mâché.

Top places to see in Alwar: 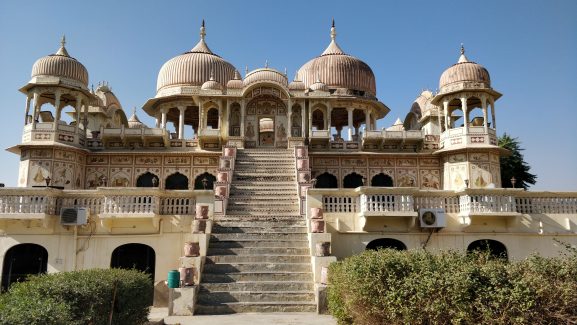 Established early in the 18th century, Mandawa is a beautiful town located in the Shekhawati region of Rajasthan. It has a galore of mesmerizing Havelis as well as resorts and is stocked with paved archways, mesmerizing forts, and magnificent mansions.

Since the entire Shekhawati region is filled with fascinating mansions with lavishly painted walls, this town is famous as the “open art gallery” of Rajasthan.

The immensely popular royal fort located in Mandwa, built back in 1755 AD, has now been completely transformed into a hotel available for the tourists.

Top places to see in Mandawa:

Rajasthan offers attractions for domestic as well as foreign travelers, including the forts and palaces of Jaipur, lakes of Udaipur, scenic beauty of Mount Abu, sand dunes of Jaisalmer and Bikaner, wildlife of Sawai Madhopur, cattle fair of Pushkar and so much more.

Rajasthan, the land of Royalty, with its rich cultural history and architecture will give you a different experience of every single place you visit. The above places are just a handful of the many secrets this ancient kingdom holds.

A visit to at least these places in Rajasthan will surely captivate your mind the very moment you visit here. Let us know what attracts you the most about Rajasthan if you’ve already been there or want to visit it.