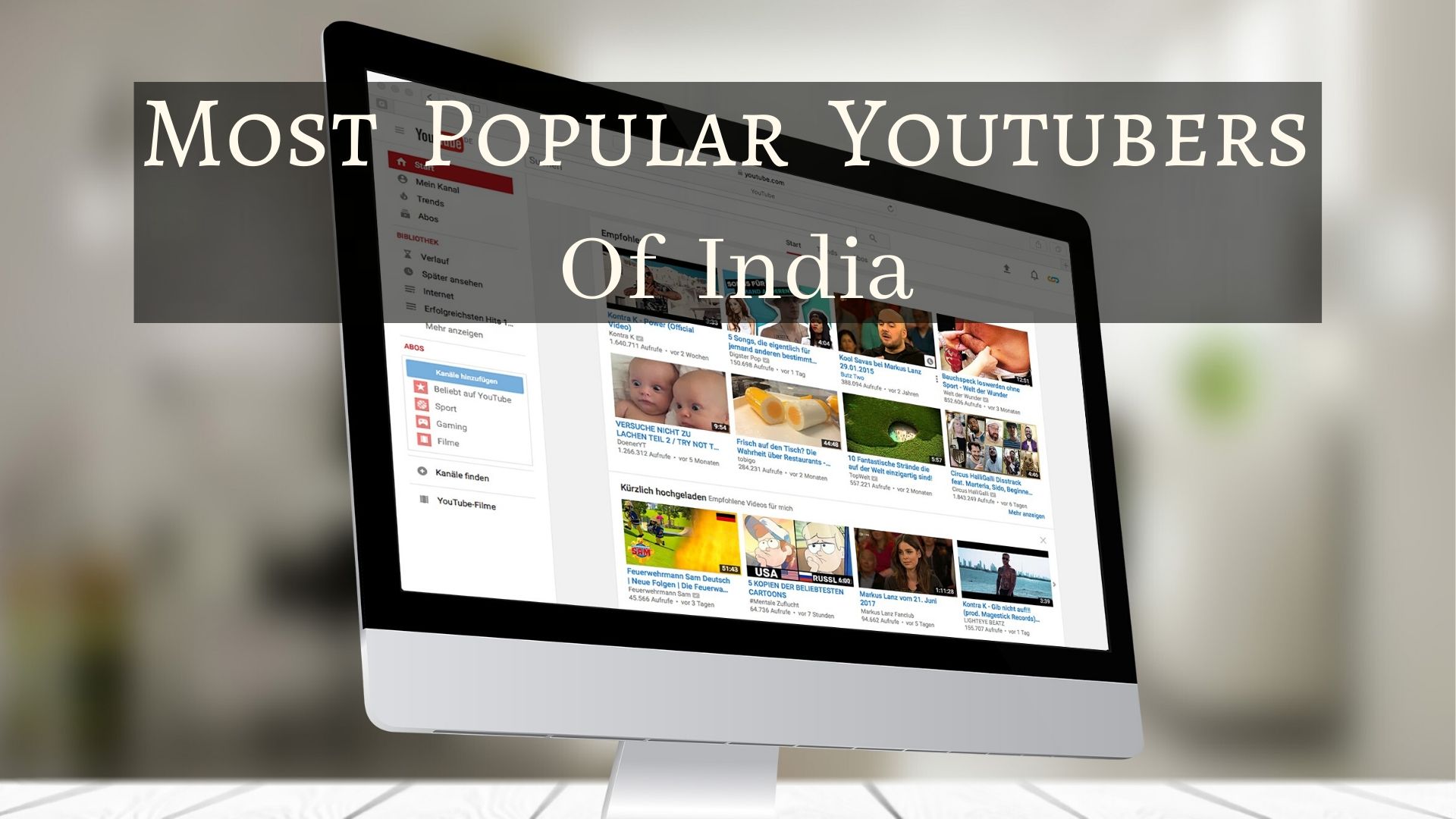 YouTube is one of the most popular social media platforms. Over the years the platform has grown from being just a place where people could upload videos to becoming a place where creative people can upload their contents and earn money.

YouTube has been popular in India for a long time and we have seen multiple Indian YouTubers who have become successful in this platform. Here are some of the top Indian YouTubers. The list is ranked according to the subscriber count and personalities who have been famous before becoming YouTubers are excluded.

Here are the list of 15 Best Youtubers In India: 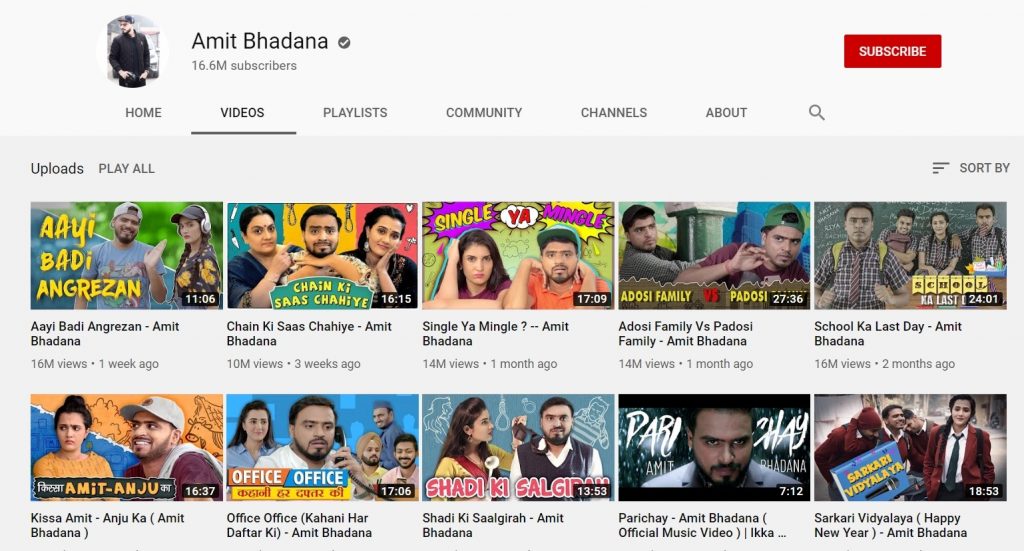 Amit Bhadana is the very first name that comes into mind when thinking of successful Indian Youtubers. He has been on youtube for a long time. One of his very first successful videos was his reply to Adele’s hit song ‘Hello’. The video went viral.

His subsequent video featured him dubbing a video on Eminem. He soon achieved success for his entertaining contents and have crossed the 10 million subscriber mark.

Today Amit Bhadana has a whopping 16.5 million subscribers on his youtube channel. Most of his videos are funny, relatable sketches mirroring the Indian Society. 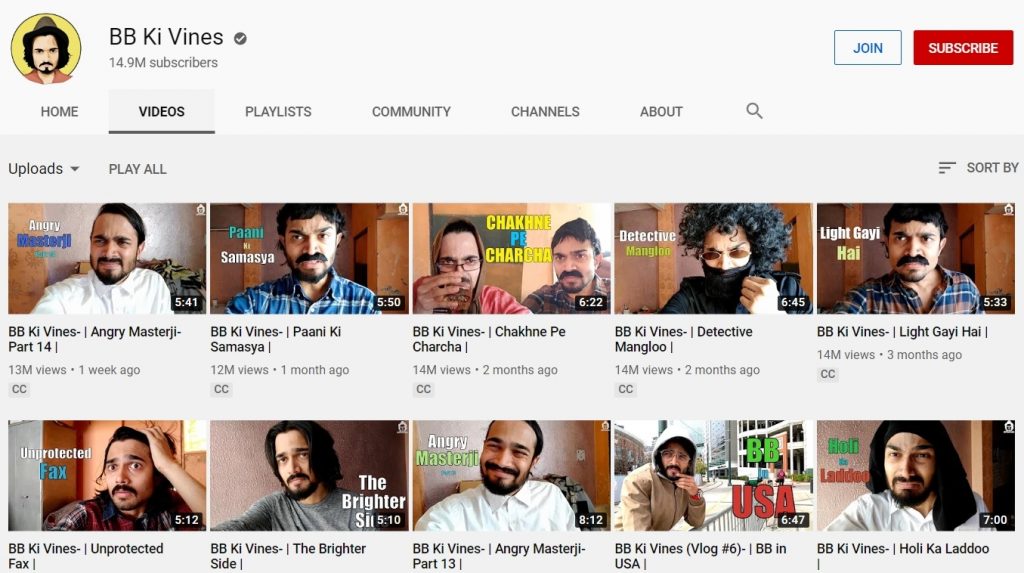 Bhuvan Bam or BB is one of the most famous Indian Youtubers who rose to prominence during the vine era. Even though vines were not supposed to be longer than 10 seconds BB decided to upload longer contents on his channels under the ‘vine’ name.

His sketches were funny and relatable which allowed him to quickly amass a huge number of followers. People shared his videos on WhatsApp, Facebook, Instagram, and on other social media platforms making him an online sensation.

Today Bhuvan’s channel has a total of 14.9 million subscribers. Most of his sketches have recurring characters all of whom are played by him. 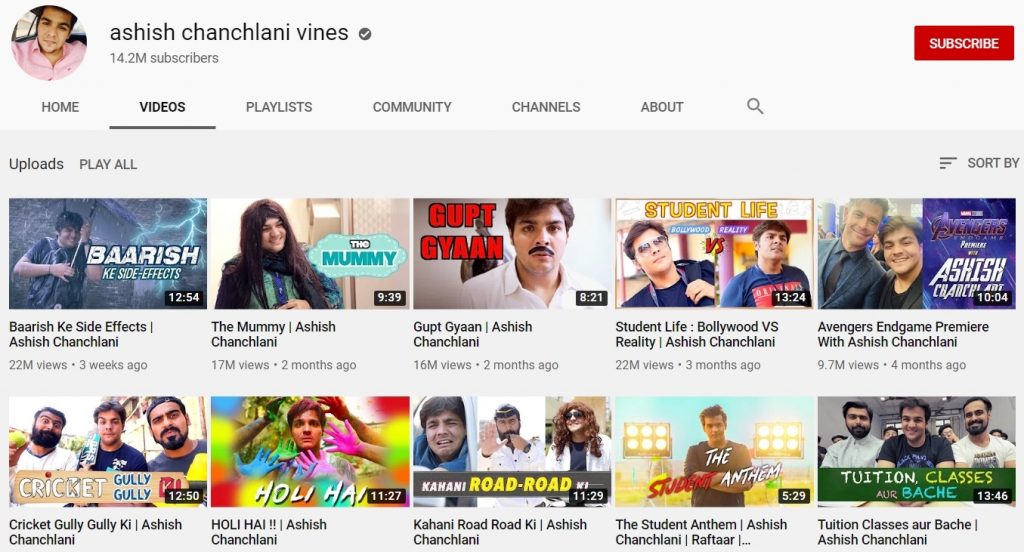 Over the years his youtube channel has grown and today his channel has over 14.1 million subscribers making him one of the successful Indian Youtubers.

Technical Guruji is one name which is synonymous with electronics review and unboxing. The owner of the channel is Gaurav Chaudhary who gained fame unboxing and reviewing smartphones and other electronic gadgets on his youtube channel.

His videos are in Hindi thus allowing general masses to understand the explanations easily. His fame has grown over the years and today he has a total of 13.9 million subscribers.

His videos include him unboxing a gadget using it and trying to explain the experiences and specifications to his viewers so that they can make an informed choice. 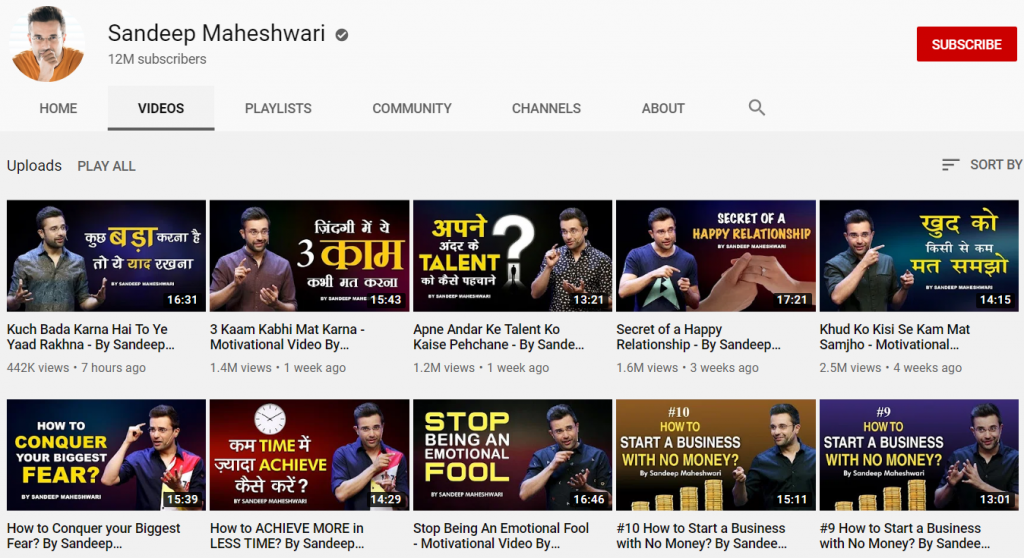 In India, Sandeep Maheshwari is a name synonymous with motivational speeches. His speeches are very popular on the internet as it is shared extensively across various social media platforms.

If you are feeling down or have reached a dead-end his videos will help you bounce back. Today his channel has a total of 11.9 million subscribers. His videos vary over a wide range, teaching and motivating the masses. 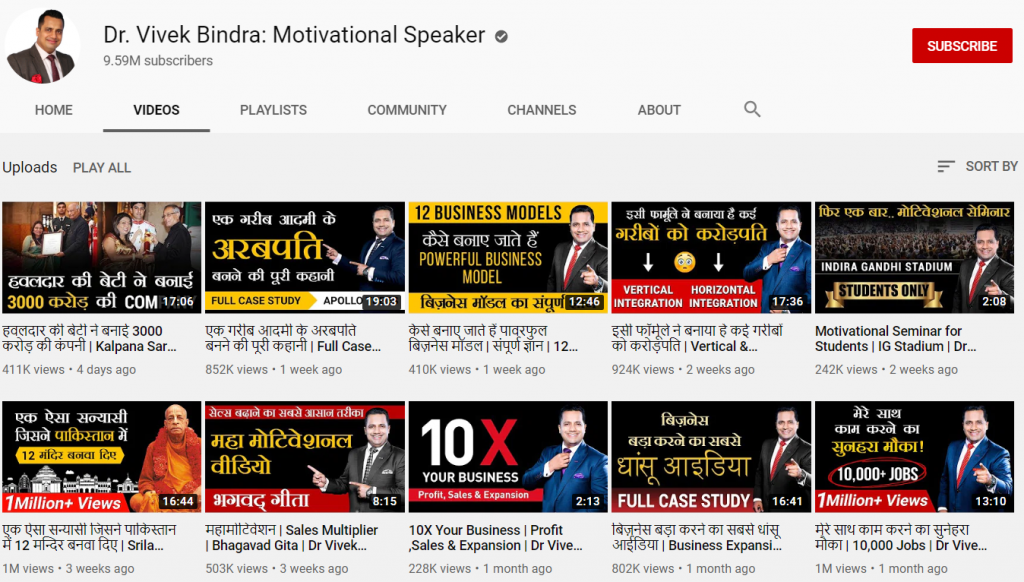 He has been a bright student and has completed his MBA from Amity College. His main influence has been Shri Mad Bhagawat Geeta which he often mentions in his video.

It is one of the reasons why he decided to become a motivational speaker. His videos are insightful and helpful. Today Dr Vivek Bindra’s channel has a total of 9.55 million subscribers.

CarryMinati is another popular Indian YouTuber who appeals to teenagers. His videos feature him commenting on other videos trying to expose their absurdity.

His channel does not have any censorship on language thus expletives are not beeped. This attracted a lot of teenagers. His content is funny and entertaining.

He has another channel where he plays PUBG and chills with fans. Today his main channel has over 7.99 million subscribers. He still features similar content in his videos which involves him commenting on various videos. 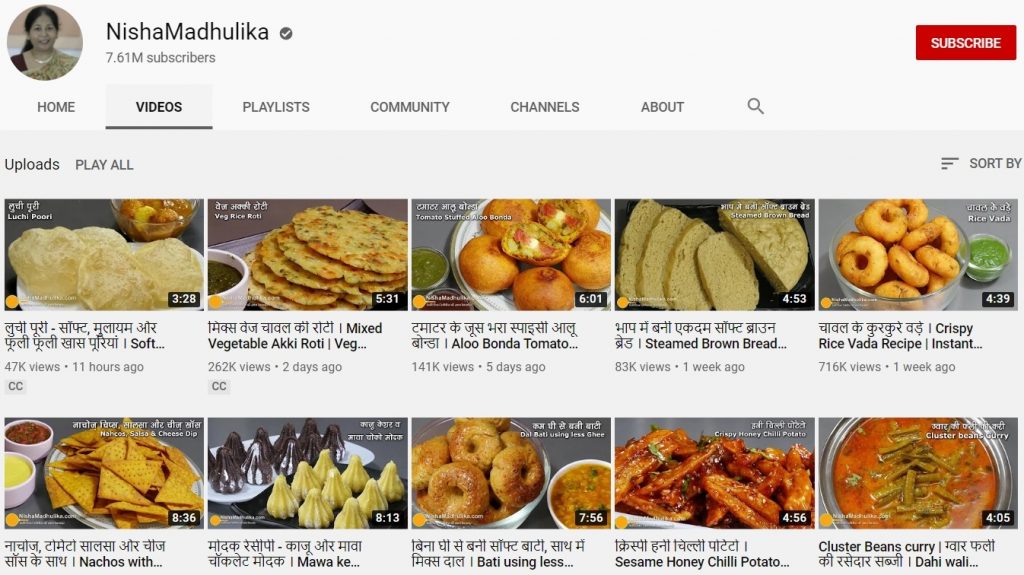 Nisha Madhulika is a famous and successful Indian YouTuber who rose to prominence due to her recipes and cooking tutorials.

Her tutorials mainly include Indian Cuisine and are easy to follow. She is an Indian chef and is a daily contributor to various websites and magazines.

Her channel has more than 1400 videos consisting of a wide variety of recipes. Today Nisha Madhulika has a total of 7.59 million subscribers on her YouTube channel. 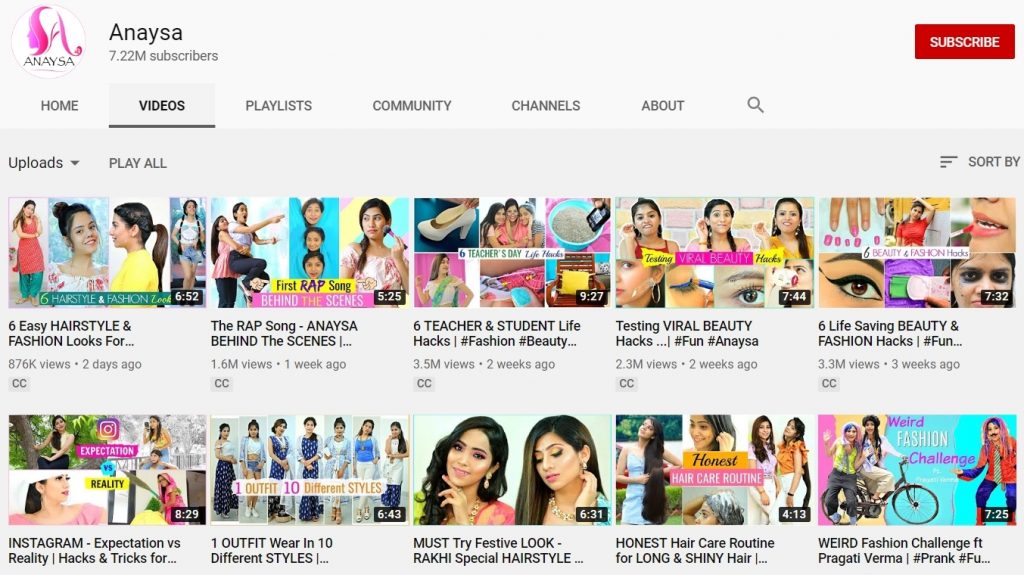 Anaysa is an Indian YouTuber who regularly uploads videos providing beauty and fashion tips. She has hundreds of videos on her channel. She uploads makeup tutorials and fashion tutorials.

Recently she has been uploading comedy videos which have their own fan following. Anaysa’s Youtube channel has hundreds of videos and has become very popular. Today her YouTube channel has a total of 7.2 million subscribers.

If music is your thing then this next YouTuber might be known to you. Vidya Vox is a famous Indian YouTuber known for her covers and remix of famous songs both Indian and Western.

Many of her videos include her singing and mashing up Western Pop Songs with Indian Songs. These songs have become quite popular and have been shared on social media platforms and played at parties.

Her songs have made her an internet phenomenon in India and her YouTube channel has 6.17 million subscribers. 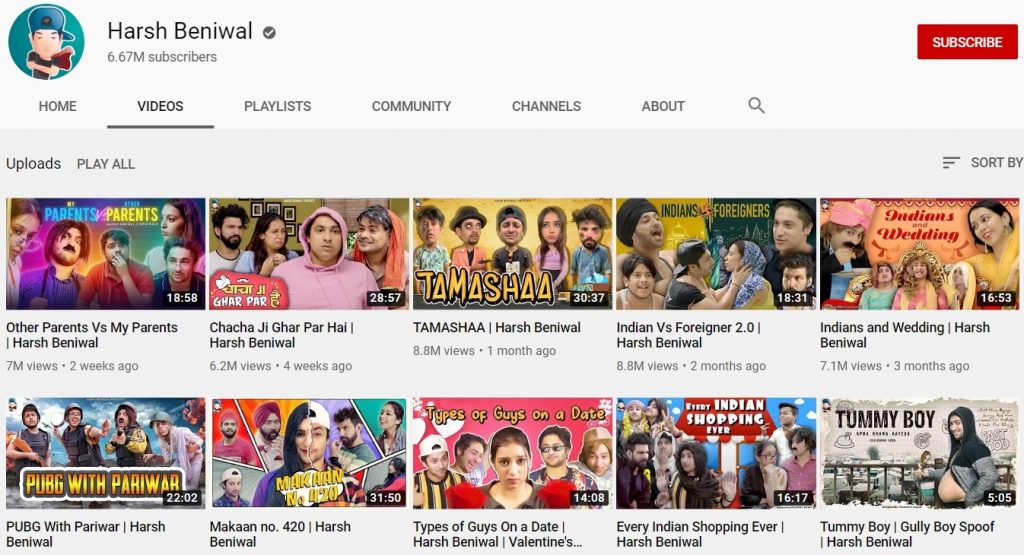 Harsh Beniwal is another YouTuber who sort of capitalized on the vines trend. His content is entertaining and funny and has a similar vibe to Amit Bhadana’s or Asish Chanchalani’s sketches.

If you like funny sketches about Indian society then his channel has plenty of content. He has a strong fan following and his videos have been watched hundreds of millions of times. Currently, Harsh’s YouTube channel has a total of 6.66 million subscribers. 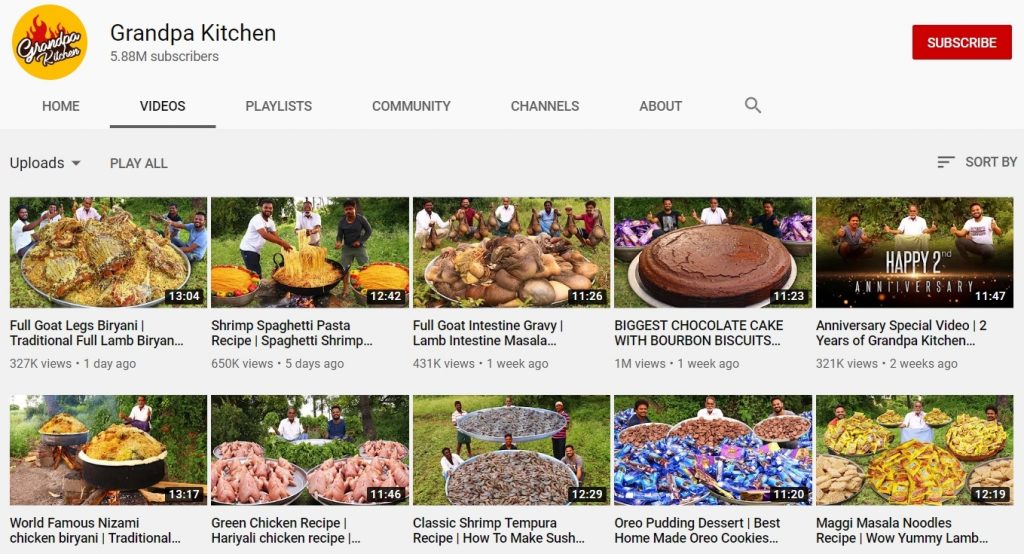 Grandpa Kitchen is a YouTube channel where Narayana Reddy an old man from Telangana, cooks various things and sort of shows the viewer’s the recipe.

The thing that distinguishes this channel from other cooking YouTube channels is the fact that Narayana cooks in bulk for underprivileged children. He provides tasty food like butter chicken or spaghetti to these children and you can see their faces light up as they eat this tasty food.

He and his grandson are a great source of inspiration as they give something back to society regularly. Today Grandpa Kitchen has over 5.86 million subscribers.

If you are looking for an in-depth cooking tutorial then this channel is quite suitable. Kabita Singh the owner of the channel is a food vlogger and loves cooking. She has uploaded multiple recipes on her channel.

Her videos are very well structured and one can learn a thing or two. Her videos mainly deal with tasty Indian recipes.

Her channel has become quite famous as her videos have been watched by millions of people. Today she has around 5.55 million subscribers on her YouTube channel. 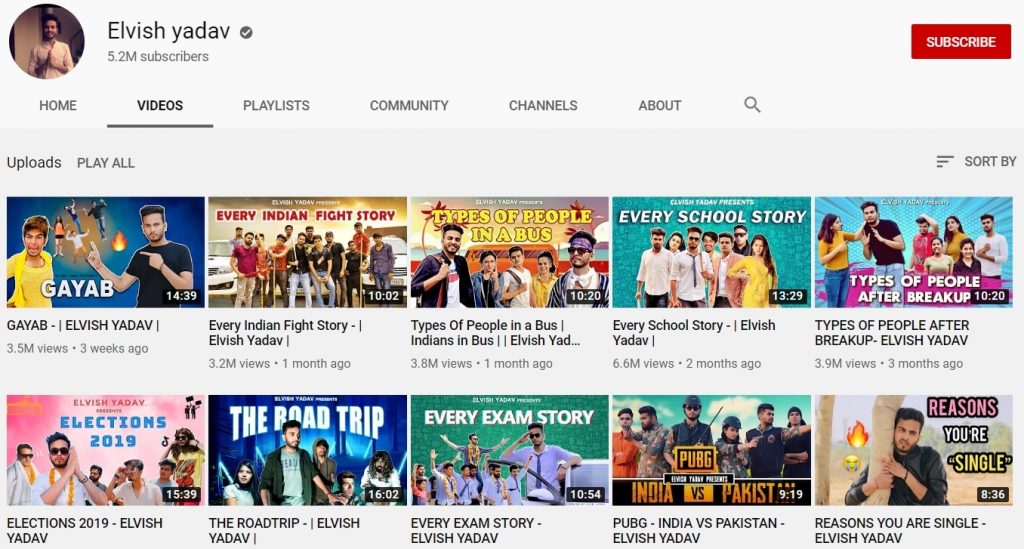 Elvish Yadav is another YouTuber who falls under the same category as Amit Bhadana, Harsh Beniwal or Asish Chanchalani.

He regularly uploads sketches which revolve around various things we see and experience in Indian society.

This type of content is quite popular on YouTube and thus Elvish’s videos have become viral. Today he enjoys a total of 5.19 million subscribers on his YouTube channel. 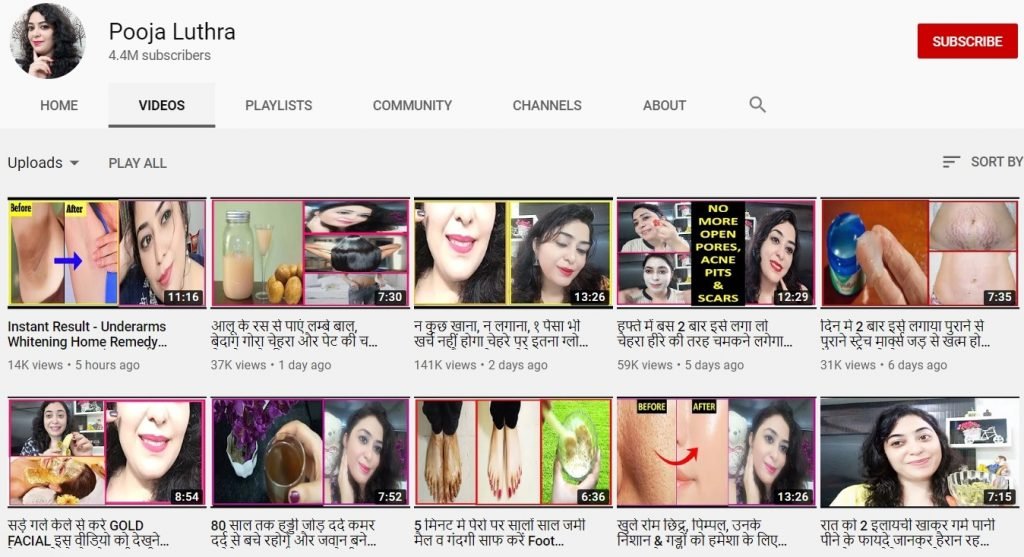 The last entry on this list is Pooja Luthra. Her YouTube channel is about giving health and beauty tips. Most of her videos provide tips and tricks for home remedies for certain problems.